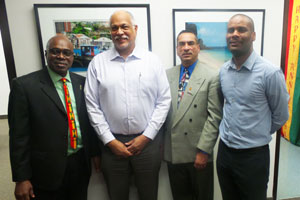 Today marks Grenada’s Independence Day and the country’s Toronto consulate prepared in part for it by showcasing art and literary works by Grenadians on Friday.

Sekou Stroude, the Grenada Tourism Authority’s director of sales for Canada, says his homeland is a culturally inclined part of the world and will soon host a number of festivals, including the May 5-7 Grenada Music Festival, which will feature reggae, soul and R&B acts.

Grenada Chocolate Fest begins May 12 and will include the likes of a “bean-to-bar” tour that showcases the entire production of chocolate.

Stroude adds that Grenada hosts an August carnival that includes a parade with masked participants, steel drum bands and singing.

Meanwhile, the April 8 Grenada Invitational Track and Field Meet will attract Olympic medalists, including Grenada’s own Kirani James, a two-time Olympic medalist in the men’s 400 metres.

Seen here at the Toronto event are consul-general Derrick James; Ian Grant of Alitours, who had photographs displayed at the event; Nazie Mohammed of Caribbean Airlines; and Stroude.