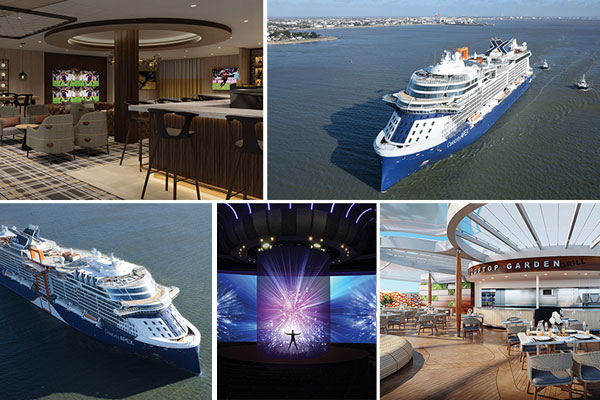 The trial, conducted between Feb. 4-8, in the Bay of Biscay near the shipyard, was overseen by more than 50 crew members, including engineers and nautical experts. Despite the optimal trial conditions, including strong winds and waves, the second-in-series ship showcased a superior level of comfort and fuel efficiency thanks to the revolutionary design of the Parabolic Ultrabow.

“The purpose of a sea trial is to test the functionality of the ship, but this wasn’t just any sea trial – and Celebrity Apex isn’t just any ship,” said Celebrity president Lisa Lutoff-Perlo. “In typical Edge Series-fashion, the ship absolutely exceeded our expectations, performing perfectly in line with our above-and-beyond operating standards.”

Celebrity Apex encores the transformational look and feel of the line’s first Edge Series ship, Celebrity Edge, with such distinctive features as the floating Magic Carpet cantilevered off the ship’s side inviting guests to eat, drink and soar up to 16 decks above the sea; the all-exclusive experience for all suite guests in The Retreat; expanded staterooms with Infinite Verandas; indoor and outdoor garden escapes; two-storey Edge Villas with their own private terrace and plunge pool; and high-style spaces throughout public areas.

It then adds new culinary, spa and wellness, and entertainment features and experiences which officials say guarantee to make Apex the industry’s “it” ship. Celebrity Apex will also debut new, all-inclusive amenities and pre-cruise concierge services in The Retreat for all suite guests.

Celebrity Apex will begin its inaugural season on April 1, with a mini-season of five sailings to Northern Europe destinations and then spend the summer sailing seven-to-12-night itineraries in the Mediterranean. In November, Apex will reposition to Fort Lauderdale for a winter season of week-long Caribbean sailings.