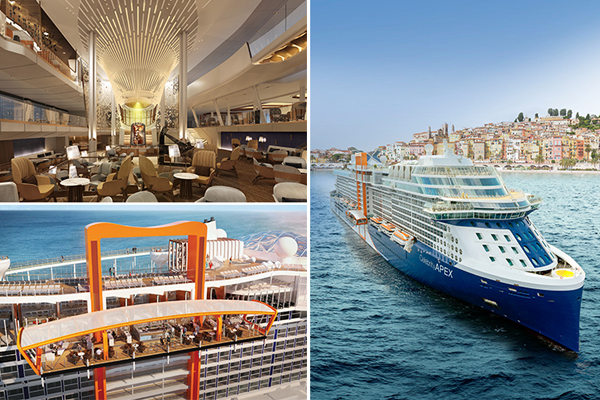 With Celebrity Cruises’ 2020 Europe season poised to be the line’s most “revolutionary” yet, the brand has unveiled four new longer European sailings on board its newest ship, Celebrity Apex, the second ship in its innovative Edge Series.

“Like her industry-changing sister ship, Celebrity Edge – which was just named one of TIME Magazine’s 2019 World’s Greatest Places – Celebrity Apex will feature an innovative outward-facing design and transformational accommodations that invite guests to take in the breathtaking world around them,” said Celebrity president Lisa Lutoff-Perlo. “Now, with these four new and longer Mediterranean sailings, guests will have the opportunity to enjoy the peak European experience in true Celebrity style.”

Following the ship’s Southampton debut, Celebrity Apex will offer a mini season of five sailings to European destinations, including the Norwegian Fjords and the northern coasts of Spain and Portugal.

It will then spend the rest of its inaugural summer sailing seven- to 12-night itineraries in the Mediterranean.