Home › Digital Extra post › Quark tour is out of this world

Quark tour is out of this world 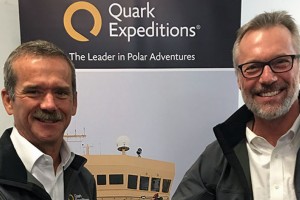 Astronaut Colonel Chris Hadfield will join Quark Expeditions on a voyage exploring the Arctic and Greenland on its Arctic Icebreaker Expedition: Best of the Canadian High Arctic voyage in true expedition style on the legendary icebreaker, Kapitan Khlebnikov.

This voyage, Aug. 22 – Sept. 8, is the third of four separate journeys, which together culminate in a historic, full circumnavigation of the Arctic. “Chris Hadfield’s Generator” is a science-based variety show that blends knowledge, perception, music and comedy, hosted by the celebrated astronaut and featuring special guests, presenting Quark passengers with insight to self-discovery through the lens of exploration.

The group will board the iconic soviet icebreaker Kapitan Khlebnikov and explore Greenland’s stunning west coast and the Canadian Far North.

Hadfield and his team will have the opportunity to experience the Greenlandic fishing village of Sisimiut, spectacular Ilulissat Icefjord, Cobourg Island’s sprawling bird cliffs, and historic Beechey Island.

Hadfield, an engineer and former Royal Canadian Air Force fighter pilot, is best known and much respected for his 35-year career as an astronaut.

“This is the ultimate earthly adventure, where real learning happens,” said Hadfield. “To go to the edge of our understanding, at the frontier of where technology can take us onboard a ship with the capabilities of this icebreaker, with a group of people that have trained together, is almost like a space expedition of its own.”

Those booking the expedition by March 15 can save 25%.