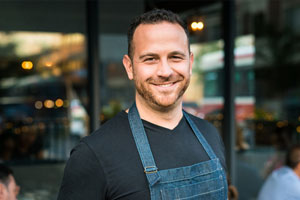 The “Culinary Capital of the Caribbean,” as many foodies from around the world describe Barbados, is rebranding the Barbados Food & Rum Festival.

Barbados Tourism Marketing Inc. unveiled the revitalized event – set to run from Nov. 17-20 – which will showcase the island’s very best dishes and offering an opportunity for visitors to try new global flavours.

Award-winning local and international chefs will once again dazzle live audiences with cooking demonstrations, while creative mixologists will demonstrate the versatility of Barbados rum.
Included in the line-up is internationally acclaimed, Michelin-starred Chef Jean-Georges Vongerichten, as well as Canada’s own beloved Chef Craig Harding.

Harding, owner of the successful Campagnolo restaurant in Toronto, specializes in farm-to-table dining, taking traditional Italian dishes he learned from his grandmother and adapting them with a fresh and modern flair. He will be returning to the 2016 Food & Rum Festival for his second year as an international guest chef, creating a unique “Gourmet Safari” fine dining experience on Nov. 20 at The Crane Resort.

Commencing with an opening night celebration at Oistins Bay Gardens on Nov. 17, festival attendees can savour the spirit of Barbados with numerous cooking demonstrations and rum tours; a signature event at the Concorde Museum; an exciting match at Holder’s Polo Field; a choice of four- and five-course Gourmet Safari dining events; and a celebratory cook-off competition on Nov. 20 between Barbados’ ministers of tourism and agriculture.

While the festival has been run for the past seven years, the 2016 re-branding is set to highlight Barbados as a major player in the global culinary tourism market.

Minister of Tourism & International Transport, Richard Sealy, stated that the island has all of the components necessary to be positioned as a leader in culinary tourism, “Though we have known it for years, today we can say that Barbados has all the epicurean assets – from expert chefs, talented mixologists and a diverse range of restaurants, to internationally renowned street food vendors and an eclectic mix of mouth-watering cuisine – to establish its own global brand.”

This year’s festival has also been timed to coincide with the island’s 50th anniversary of independence, according to BTMI CEO William Griffith, “We plan to pay homage to our traditions this while constructing a platform for a new, trendy and competitive culinary market—one that can bolster our tourism and related sectors and establish Barbados as a leading destination for culinary travel.”

Among the featured local chefs participating in the festival is Barbados’ own UK-based celebrity chef, Jason Howard; the award-winning Chef Creig Greenidge of CM Catering; Chef Damian Leach, Taste of the Caribbean Chef of the Year 2016; Henderson Butcher, head chef of Divi Southwinds Hotel; Michael Hinds, culinary director of Terasu Inc.; and independent chefs John Hazzard and Michael Harrison. Taste of the Caribbean Bartender of the Year, Ryan Adamson, will also be highlighted during the festival with his award-winning cocktail.

An official calendar of events can be found at http://www.foodandrum.com.

For more on Barbados, go to http://www.visitbarbados.org.