AC’s Lockheed 10-A takes to the skies 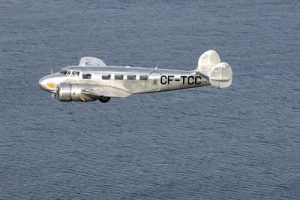 In honour of Air Canada’s 80th anniversary, Air Canada’s Lockheed 10A vintage aircraft is taking to the skies across Canada.

After taking off from Vancouver on Sept. 9, the L-10A made overnight stops, as well as fuel stops, at airports across Canada, and will be on public display at the Royal Aviation Museum in Winnipeg on Sept. 13 and 14.

As part of the tour, the vintage 10-seat aircraft overnighted or will overnight in Edmonton, Saskatoon, Regina, Winnipeg, Thunder Bay, Toronto, Ottawa, Montreal, and Halifax.

Aviation enthusiasts may track the aircraft’s movements by its registration, CF-TCC, and look out for the silver aircraft in the skies as follows: Week of Sept. 11: Saskatchewan, Manitoba, Ontario; Week of Sept. 23: Ontario, Quebec, Maritimes and returns to Manitoba.

The Lockheed L‐10A Electra was designed in the mid-1930s by the Lockheed Aircraft Corporation, to compete against the Boeing 247 and the Douglas DC‐2. This was Lockheed’s first all‐metal twin engine aircraft design, and was first flown on Feb. 23, 1934.