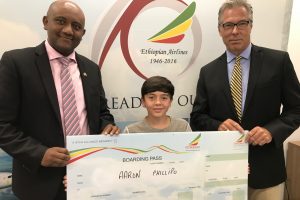 The votes are in and the final winners chosen in the Ethiopian Airlines Canada social media contest “Celebrate 150” are Aaron and Jamie Collard are the grand prize winners.

Aaron and Jamie have won a trip for two to Africa. The trip includes a 10-day vacation package from Toronto to Victoria Falls, Zimbabwe and Addis Ababa, Ethiopia on Ethiopian Airlines Cloud Nine business class, valued at $10,000.
“I can’t believe it! It was really fun making the video. Now I get to go on this trip and see Victoria Falls,” said Aaron.

Aaron mentioned how he raised awareness in his community about the contest and received “tons of support.” Aaron also promoted the contest on his own through local media and social media. He even created a sign and stood in the local mall parking lot to encourage local residents to vote on his behalf.

Ethiopian Airlines Canada hosted the contest on its Facebook page @EthiopianAirlinesCanada to mark Canada’s sesquicentennial. People were asked to upload a video describing what they love about Canada. The top five finalists were selected by the airline as the finalists received thousands of likes and shares during the duration of the contest.

“We loved how creative people were and the overall response was great. We thank all the participants and finalists for putting so much effort into their videos. Everyone did a great job,” said Birhan Abate, country manager, Ethiopian Airlines Canada. “It was a pleasure meeting Aaron and his family. Judging by his excitement of winning the trip, we feel he will be sharing a lot more videos with us on his trip too.”