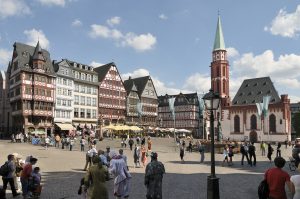 The flights will begin June 1, 2017 and June 8, 2017, respectively, and tickets are now available for purchase.

Smith noted that, “The addition of our flights to Frankfurt, one of Europe’s most important hubs, offers customers a wide array of convenient choices and the ease of one-stop connections with our Star Alliance partner Lufthansa when travelling to southern, central and eastern Europe as well as Africa, the Middle East and beyond.”

And he continued, “We will be the only airline flying non-stop between YVR and the two largest airports in the London metropolitan region during the peak summer travel period with the addition of London Gatwick. By next summer, Air Canada will serve five European destinations non-stop from YVR including two significant hubs, Frankfurt and London Heathrow, London Gatwick, Dublin, and on a code-share basis with joint venture partner Lufthansa Munich, strengthening YVR as an important hub that connects our B.C., Western Canada and US routes to our expanding international network.”

In the summer of 2017, Air Canada will operate to Frankfurt from five points across Canada: Vancouver, Calgary, Toronto, Montreal and Ottawa.

Its Vancouver-London Gatwick service will be operated by Air Canada Rouge with Boeing 767-300 ER aircraft featuring premium and economy cabins. Flights are timed to optimize connectivity to and from flights within BC and the Pacific North West at Air Canada’s Vancouver hub.

Next summer, Air Canada Rouge will operate to London Gatwick from two points across Canada — Vancouver and Toronto.