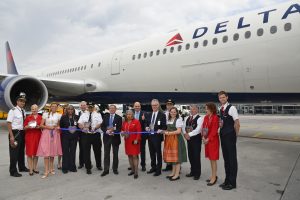 The aircraft of Delta Airlines have been a familiar sight at Munich Airport since the new airport location opened in 1992.

The US carrier departs daily from Munich to Atlanta, its homebase that happens to be the world’s biggest airport. Now it is expanding its route map – adding a new connection between Munich and Metropolitan Wayne County Airport in Detroit.

A 245-seat Boeing 767-400ER will depart daily at 10:15 a.m. for Michigan’s largest city, where passengers can choose from among 113 connections to major cities in the US.