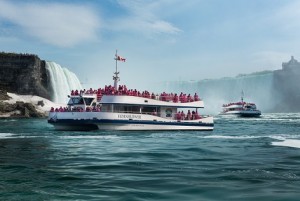 It’s no April Fool’s joke? Hornblower Niagara Cruises is set to open its doors for a third season on April 1, its earliest opening date yet.

“We’re ecstatic to announce the opening of our third year of operations in Niagara Falls,” said Terry MacRae, CEO of Hornblower. “We had a fantastic first two years with tremendous community and industry support. We look forward to another successful year in Niagara.”

Its inaugural season was a year of many firsts for Hornblower, including the introduction of evening Falls Illumination Cruises and Falls Fireworks Cruises in the Niagara River. And, stronger than anticipated demand allowed the marine hospitality company to remain open well past the traditional Oct. 24 end of season.

Last year, Hornblower also introduced new land-based events in their Lower Landing Visitor Pavilion and private Event Tent. Hornblower also offers a unique way to experience the Falls with the Niagara Guardian now available for private charter. The 150-passenger open-air jet boat travels up the Niagara River to the base of the Horseshoe Falls.