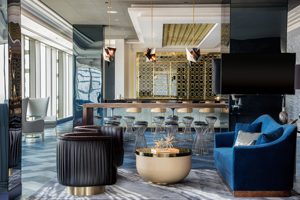 Hotel Indigo Los Angeles Downtown, the newly opened InterContinental Hotels Group property, has debuted 18 Social, a top-floor cocktail lounge that transports guests back to the mystery and allure of the speakeasies that defined the 1920’s Prohibition Era.

Officially opened to the public on June 30, this trendy new haunt features sweeping views of the iconic Los Angeles skyline from its 18th-storey location.

Influenced by the 20th century era of Downtown Los Angeles and envisioned to be a place where Angelenos can decompress while enjoying signature drinks and stunning views, 18 Social includes a full bar, lounge area, and table seating. Taking cues from the town’s celebrated theatres, whose photographs line the entry walls, the lounge’s dark blue colour scheme is finished with neon lighting and metallic finishes for an industrial flair. In addition to indicating its top floor location, the name – 18 Social – was inspired by the 18th amendment, which outlined the ban on manufacturing and selling liquors in the early 1900’s.