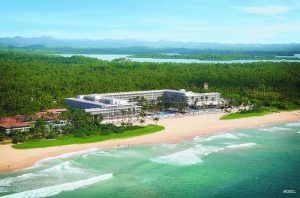 Riu has arrived in Asia with a five-star hotel in Sri Lanka.

The Riu Sri Lanka opened its doors Aug. 5 and its location in southeastern Sri Lanka makes it a perfect location from which to explore the island or as a luxury base, having been designed specifically to offer a relaxed atmosphere.

The newly constructed hotel offers 24-hour all-inclusive service and overlooks the beach. The hotel has three large pools and a children’s pool, sunbathing terraces, Jacuzzi, gym and the Renova Spa wellness centre, which includes a hairdresser and massage service. In addition, the rooms offer many home comforts, including a balcony or terrace, 43-inch flat screen satellite TV, air conditioning, an electronic safe and minibar.

Guests will be able to savour Asian specialties at the Kaori restaurant, Italian delicacies at La Forchetta, or if they want a barbecue al fresco by the beach they can eat at the Saute restaurant. The hotel also has two buffet restaurants, Riti Panna and Ceylon, as well as four bars, one of which is a pool bar. There is also the Pacha nightclub.

Riu plans to expand in Asia, including the construction of up to three more hotels set to open between 2018 and 2019. The first will be in the Maldives, where two hotels will be inaugurated offering a combined total of 422 rooms, including suites constructed over the water. In addition, the chain plans to open its first hotel in Dubai, UAE, in 2019.