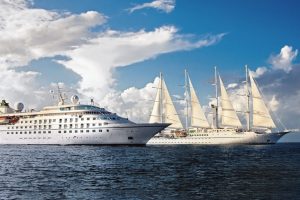 Windstar Cruises has made good on a 2016 promise to the travel agent community with a new program aptly named “Star Promise.”

According to officials, the agent-centric initiative was developed to set Windstar on a course to be the best travel agent partner in the industry for small ship cruising.

Star Promise also gives Windstar an internal stake in the ground emphasizing its company-wide commitment to travel agents and the value they bring to cruise commerce.

Results for Star Promise show that the cruise line has been successful at making travel agents’ jobs easier to sell and manage client cruise vacations on the line’s six small ships. Marked improvements on all fronts have contributed to the success, including executive-level commitment to putting agents first; expansion to global deployment with new cruise destinations including Asia, Alaska, and Canada/New England; and 24/7 agent access to book and manage reservations through a new online booking engine.

“It’s been a year since we launched Star Promise and we are seeing overwhelmingly positive results. Every day I hear from one of our valued travel agent partners about how a particular initiative has helped them increase their Windstar Sales as well as grow their business overall,” said Windstar vice-president of sales Steve Simao. “We’ve worked hard to deliver on our promises in the past year and I can confidently say we have delivered. Going forward we will continue to use our promises as a guiding principal and we will continue to seek out agent input. We want to be travel agents’ number one small ship cruise line of choice.”

Windstar seeks travel agent feedback regularly on how the upscale line is performing for travel agents and how the Star Promise initiative is helping drive business. Anecdotal evidence points to a healthy and growing relationship.

Group business has doubled under the new program, and agents are excited and motivated by the new online booking tools, namely Windstar’s redesigned and easy-to-use Agent Hub, serving as a one-stop-shop for sales promotions, company news, training tools and other resources.