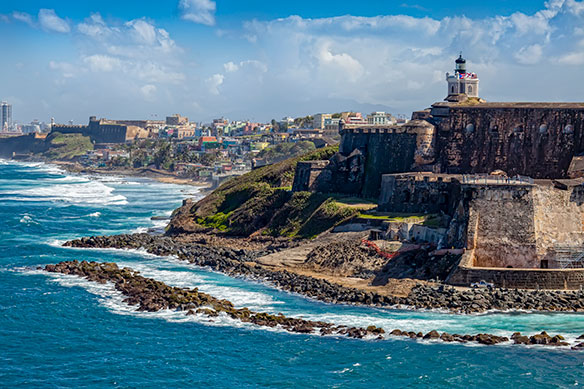 (Photo above: The 16th-century citadel of El Morro is a San Juan landmark.)

Hurricane Maria huffed and puffed, but tourism officials say it couldn’t knock Puerto Rico’s tourism trade down for the count.
Those officials say power is once again up and running throughout the country, tourists visiting will find plenty of hotels and attractions to choose from, cruise ships are regularly docking in and sailing in large numbers from San Juan, and air travellers bound for the destination will have plenty of options.
And that’s a message Puerto Rican tourism officials want to share with the international travelling public.
With the one-year anniversary of Hurricane Maria rapidly nearing, tourism officials say their island is largely back on track and there’s no reason for tourists to shun it.
Maria – which battered Puerto Rico and other Caribbean islands in mid-September 2017 – is now blamed for 2,975 Puerto Rican deaths and newspaper reports telling of how much of Puerto Rico was struggling without the likes of electricity and clean water long after the winds faded drew international attention to a destination where tourism is a main revenue-generator. Angry accusations from desperate locals that the US government was neglecting the US territory also made headlines.
The situation led to the tourism industry largely retrenching from the island for some time.
But Brad Dean, CEO of Discover Puerto Rico, a newly formed non-profit aimed at promoting the island, told Travel Courier that tourists who were leery of visiting Puerto Rico in the months after Maria shouldn’t be now.
“We are confident that travellers who do their research to uncover the current state of the island will see that we’re back up and running,” he said. “We’re confident in our product, and that visitors will enjoy their time in Puerto Rico, especially considering the remarkable progress made since Hurricane Maria and the variety of activities and experiences the island offers.”
There are now 132 hotel options available for visitors, which amounts to 89% of all hotels on the island. That translates to 10,806 rooms, with another 4,218 being renovated and slated to open soon. Three thousand, eight hundred more rooms are in the works when more hotels open this fall, among them The Dorado Beach, a Ritz-Carlton Reserve and The St. Regis Bahia Beach Resort.
As well, the island now has more than 189 tourist attractions available, including Old San Juan walking tours, the Bacardi Tour telling of that rum distiller and 13 golf courses and 16 casinos.
Air capacity to the island is now close to pre-hurricane levels and increasing, and is expected to reach pre-Maria levels before the end of the year.
Dean said Puerto Rico is committed to using lessons learned from Maria to “ensure we are well-equipped to best support travellers and our partners needs during future storms.”
However, he conceded that anniversary coverage of the hurricane will mean images of the storm will resurface in news reports and said Puerto Ricans are working to offset negative reminders of the storm in part through the hashtag #CoverTheProgress.
www.DiscoverPuertoRico.com