Home › Digital Post › A record year for Canadians in Spain

A record year for Canadians in Spain 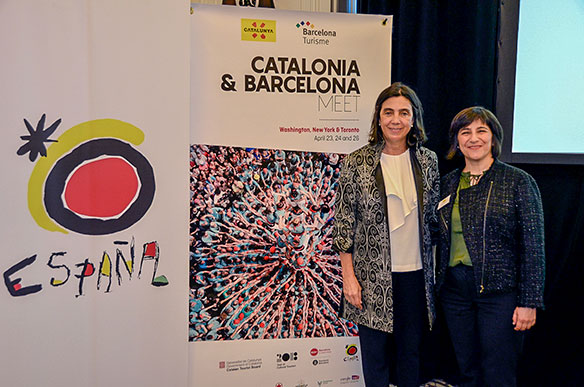 Tourism to Spain is on a roll.

Overall arrivals to the European destination soared to 81.8 million tourists in 2017, including a record 489,307 Canadians – representing a growth of 25.2%.
“2017 was a very impressive year for the whole of Spain for the different markets and also for Canada,” Laura Pena Alberdi, director of the Spanish Tourist Office, Embassy of Spain in Canada, tells Travel Courier. “We have a new record year, almost half a million Canadian people visited Spain.”
Overall tourism arrivals represented an 8.6% increase from 2016, and positioned Spain in second place on the world ranking of most visited countries, following France.
“45% went to Catalonia, so Catalonia is the first destination for Canadian people – they like it very much,” she says. “This year also, Catalonia has shown a very important and healthy growth in the number of Canadian people going to Catalonia.”
While Barcelona, with its historic Gothic Quarter, La Rambla and some of Antoni Gaudí’s most recognized works, proved to be popular for Canadians, Cristina Gargallo, North America Director, Catalan Tourist Board, says the region offers much more than the draws of the city.
From the Pyrenees mountains to 500 km of coastline ranging from long sandy beaches to fishermen’s villages, she says travel agents can increase their bookings to Spain by taking advantage of the surrounding areas.
Opportunity for growth
“One opportunity for growth is a lot of the demand is focused on Barcelona, but to know about all the opportunities that you can do outside of Barcelona, as an add-on to extend the stay or it gives new reasons to stay for longer,” Gargallo says. “What’s good about Catalonia is, it’s a small territory, but very diverse, so I think they have a lot of opportunities for selling those excursions to their clients, and those additional extra long-stays in the area to add it onto Barcelona.”
Beyond Barcelona, she says clients can explore smaller cities like Tarragona, with its Roman heritage, and Girona, known for its medieval architecture, has a well-preserved Jewish Quarter and houses the restaurant
El Celler de Can Roca, which has been awarded best in the world twice by the The World’s 50 Best Restaurants ranking. Home to more than 50 Michelin-starred restaurants, and known for being the birthplace of Cava, Gargallo says the culinary scene is another top draw.
“We have tapas stores, wineries, slow food restaurants, food associations – a lot of initiatives around the theme of food; and also now, we always talk about wineries, but we also have a lot of beer in Catalonia, as well,” she says.
As 2018 was named The European Year of Cultural Heritage, the region is also promoting its cultural offerings.
“It’s one of the reasons why people come to visit us,” says Gargallo. “We’re using this year of culture in 2018 to showcase all the different possibilities that you have in Catalonia, in Barcelona but also outside of the city to get to know the Catalan culture and heritage.”
Following Catalonia, Madrid and Andalusia were the most visited regions in Spain by Canadians.
“We work very closely with [travel agents], and they believe in our product in Spain and in Catalonia, and so they play a very important role for us,” says Pena Alberdi.