Tourism Authority of Thailand upbeat about its new Canadian office 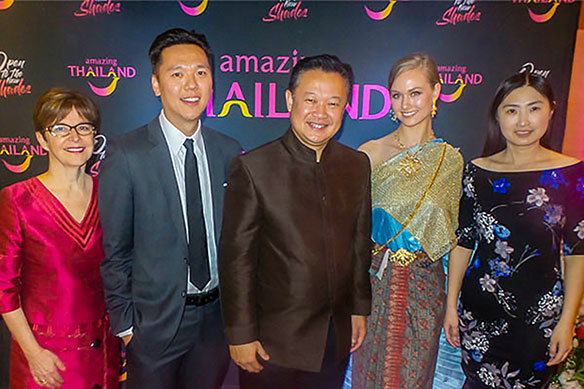 The Tourism Authority of Thailand’s first dedicated Canadian office is up and running, a development expected to lead to a quick jump in the number of Canadians vacationing in Thailand.
The TAT, which previously had its Canadian representatives working from home, held an April 23 grand opening for its downtown Toronto office, an office it expects will enable Thailand to make inroads when it comes to attracting tourists from this country.
“We hope to work closely with travel agents,” Yuthasak Supasorn, governor of the tourism authority, told Canadian Travel Press. “We can work more closely with Canadian entrepreneurs.”
Thailand last year saw 258,392 Canadians visit the country, and Supasorn said the tourism authority hopes to see that figure reach 300,000 within three years.
Much of Thailand’s tourist trade revolves around its famed beaches, but Supasorn said the predominantly Buddhist country can offer Canadians “unique local experiences.”
First-time visitors generally visit the likes of Bangkok, Chiang Mai and popular beach resorts like Pattaya or Phuket. But Supasorn said visits to “secondary provinces” can provide tourists with interesting experiences as well. “If you love Chiang Mai, you’ll love Chiang Rai.”
Thailand doesn’t now have direct air ties with Canada, but Supasorn said the tourism authority is talking with Air Canada about possible Bangkok service.
Thai Airways may restart United States service as well, he continued.
Those attending the evening were also told by Miss Universe Canada Lauren Howe – who’s visited Thailand – that the country “offers some of the greatest variety you can imagine.”
Harold Ho of Royal Scenic, which has a Thailand program, in turn, told the gathering that Thailand is “smack in the middle of everything. There is so much to see in Thailand…from beaches on tropical islands to lush landscapes in adventurous jungles and forests. It is also an ideal hub as a base to visit other countries in the Southeast Asia region.”
Ho said vacation experiences in Thailand can include spa visits, medical and wellness treatments, golf and romantic honeymoons.
Our dollar goes “a long way” in Thailand, he added.