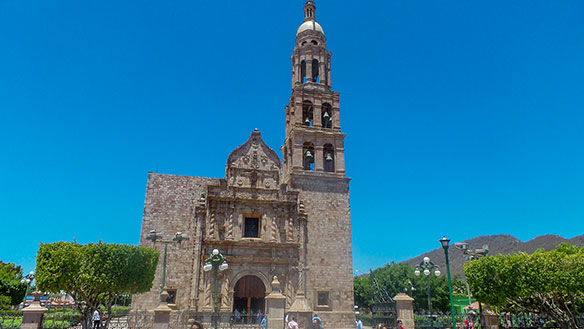 The tourism trade in the Mexican town of El Rosario is clearly benefiting from what’s truly a silver lining.
El Rosario, found 76 km from the Pacific coast city of Mazatlan, was founded in 1655, and over the centuries, the mining of silver was a major component of its economy.
Town official Leopoldo Bouttier notes that El Rosario has been designated a Magical Town by the Mexican government, a designation that reflects the belief that the destination is particularly attractive to tourists.
Bouttier says the designation was largely received because of the town’s imposing, Baroque-style Our Lady of the Rosary Church, which among other things is home to a gold-encrusted altar.
Our Lady of the Rosary was built in the 18th century after a silver vein (El Rosario is found above some 70 kms of mining tunnels) was found near the-then church, with subsequent digging leaving that original church unstable. Only part of that church remains standing.
“It’s a story of the faith of the people of El Rosario,” Bouttier says of the building of Our Lady of the Rosary Church.
Bouttier says mining company “greed” led to the downfall of the previous church, but its replacement is particularly impressive and today attracts tourists to the town.
El Rosario was also the hometown of popular Mexican opera singer Lola Beltran, who’s remembered there today, in part because of a statue of her and a museum dedicated to her.