A World Of Discovery 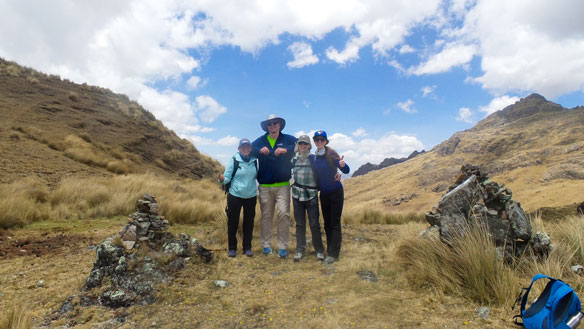 explora’s Canadian representative Dallyce Macas (2nd from r) joined others on an Andean hike, while staying at explora’s Peruvian resort.

Chile-based explora, which has upscale resorts in remote parts of South America, joined with The Moorings, which offers boat rentals in the Caribbean, the South Pacific and the Mediterranean; Quark Expeditions, which has polar sailings; and TCS World Travel, which uses private jets to whisk clients to often remote parts of the world, for a recent gathering that familiarized agents with their products.

The Moorings, TCS World Travel and Quark are owned by Britain-based Travelopia, while explora is Chilean-owned.

The event – billed as a “world of discovery” – saw all four companies update agents on what they offer in a friendly format.

“We can all promote together because it’s non-competitive,” said Dallyce Macas, Canadian representative for explora. “Instead of competing, we’re sharing.”

The format won the approval of Toronto-based travel agent Gloria Cavlovic, who said the non-mainstream evening gave attending agents “four-for the price of one” updates. “It’s a lot more interesting.”

Also welcoming the opportunity to learn about four markedly different companies in the same evening was Ann Fairlie of Merit Travel, who labelled the “one-stop informational evening” a “great idea.”

Macas noted explora now has “upmarket all-included” properties in several destinations, among them northern Chile’s Atacama desert, considered the driest desert in the world. Atacama has “the clearest skies in the world,” she said. “We’re not about an adult daycamp…We’re about immersing them (clients) with the locals in these areas.”

Another explora lodge is in Chilean Patagonia, which Macas described as “one of the most pristine areas in the world,” and another is planned for Argentinian Patagonia.

Cara Matthew of Quark Expeditions said that company is “uncompromisingly polar,” having sailings in both the Arctic and Antarctica.

The company likes to focus on “off-ship experiences” that can include overnight camping in Antarctica, hiking and sea kayaking, with one of its guides having circumnavigated New Zealand by kayak.

She said Quark’s “polar fever” has it exploring “some of the most remote places on the planet,” including the Russian High Arctic, home to abundant wildlife.
Brooke Galloway of TCS World Travel said that company’s clients may find themselves travelling the world on a “luxury” B757 that features the likes of 52 first class flat-bed seats, visiting the likes of Machu Picchu, Angkor Wat, Marrakesh and Petra. The company likes to provide clients with such touches as dinner on the Great Wall of China.

“There’s really a trip out there for every type of traveller,” she added.

Greg Marlo of The Moorings reported The Moorings’ clients can opt for crewed power or sailboats or crew the boats themselves. Boats may be available for US$999 a week, he said and clients aren’t bound by an itinerary, unlike those who vacation on large cruise ships. “You never miss the boat because the boat waits for you”
Clients can have an “all-inclusive crewed yachting vacation” with The Moorings, now marking its 50th year, he continued.