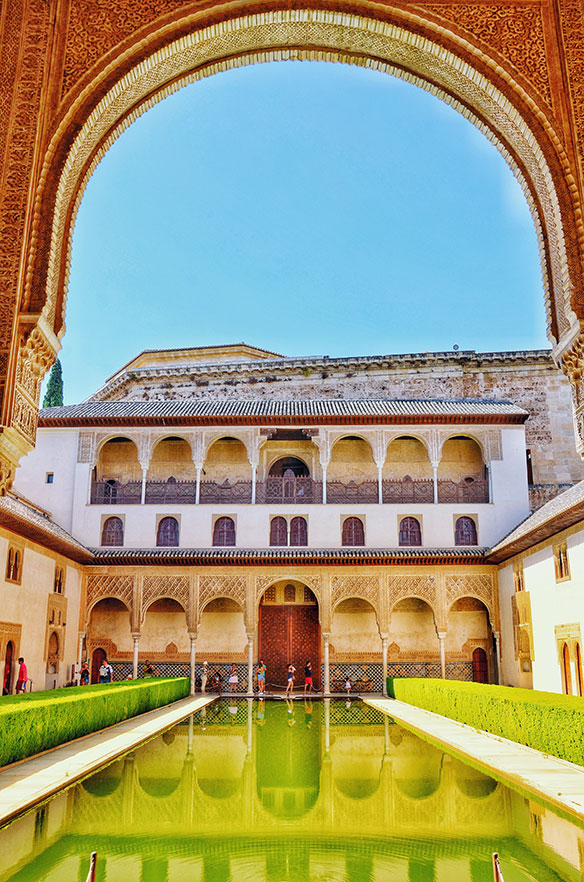 It was a spot so scenic that upon first sight, author Washington Irving described it as “a most picturesque and beautiful city, situated in one of the loveliest landscapes that I have ever seen.” Even decades after backpacking through Andalusia as a student, Bill Clinton returned to Granada to witness what he’d called “the most beautiful sunset in the world.”
Looking at the impressive reddish Moorish Alhambra castle jetting out from the luscious green terrain surrounded by the Sierra Nevada mountain range, it’s easy to see why the view captivated writers and the future president alike – and continues to draw in daily admirers.
Taking its name from the Arabic “al-qal’a al-hamra,” which means red fort, our G Adventures chief experience officer (CEO) Lalo García explains there are several theories behind why Alhambra came to be known as the red one.
“One theory is because the stones are red, but another one that makes a lot of sense is in order to construct it, the king said I want to complete this as soon as possible, so we’re going to work day and night,” he says. “How did they work at night when they didn’t have light? They started making fires all around the hill so people from afar, when they looked to the mountains, they saw the red fire, so that’s one of the reasons it could also be called Alhambra.” 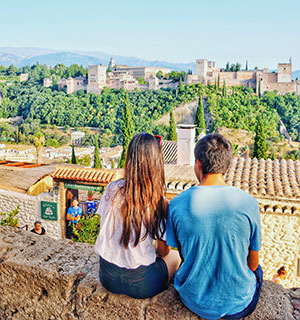 Overlooking the Alhambra in Granada

Although it already appears massive from a distance, it’s not until we walk around the grounds and take in multiple palaces, a summer home and an extensive garden, that the colossal scale of one of the best preserved medieval citadels in the world truly comes into perspective. As the tour wraps up, our local guide suggests we head to one of the lookout points featuring panoramic views of Alhambra later that night, take photos, watch the sunset and then take the path back into town.
“Get lost,” says Ramon Lerma Martos. “That’s my recommendation. You’ll find all these beautiful corners.”
Coming across beautiful sights and incredible views winds up being a common occurrence over the course of the eight-day G Adventures Discover Moorish Spain itinerary – though we never purposely get too far lost, while our trusty CEO is around (during free time, mind you, is another story, but therein lies the excitement of discovery).
The heart of the itinerary focuses on the highlights of Andalusia, which is packed with over 1,300 years of history and traces of Roman, Arabic, and Christian influence, and uncovers another side of Spain than staples like Barcelona and Madrid. 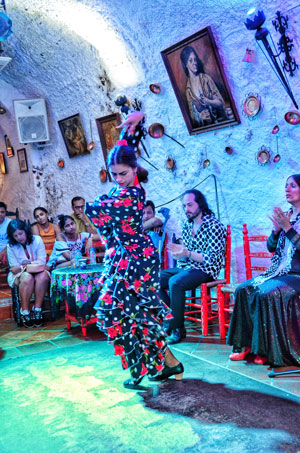 The art of flamenco
Up in a small cave set on a steep hillside of Granada, we’re learning how to dance flamenco in the Roma quarter. It seemed easy enough in theory, but as we attempt to replicate the moves of our instructor – pounding and scuffing our feet on the floor to a quick rhythm, twisting and turning in different directions and simultaneously making hand movements – it’s become more of a comedy of errors.
Despite speaking different languages, we quickly gather that our teacher wants us to keep a stern face while we move, as our CEO interprets that the origin of flamenco was a form of expressing feelings of suppression and suffering.
As dedicated pupils, here in the birthplace of flamenco, we eventually manage to string a few “simple” steps together, making light of our lack of technique in the process, but maintaining a straight face while we dance. Although we never quite master the art, the group gains an understanding of the history behind the passionate and intense dance, and we leave with a deeper appreciation for the performance we later take in.
The flamenco dancing lesson is one of the exclusive experiences of our tour, which is part of a joint collection between G Adventures and National Geographic. The G Adventures’ National Geographic Journeys trip styles are designed to take travellers deeper into the cultures they explore with greater hands-on exploration and interactions with local experts.
“The Journeys’ traveller is one who is curious and educated, and someone who is looking for that genuine cultural immersion experience,” says Amanda Dunning, brand manager for National Geographic Journeys at G Adventures.
Over the past year, Journeys have been the strongest growing travel style for G Adventures.
“The Journeys story is all about growth. Compared to even two years ago, bookings of these trips have soared more than 100%, and we’re adding more product to keep up with demand,” says Aizaz Sheikh, Canadian marketing director for G Adventures. “In terms of the trend lines, these tours are proving to be one of the most attractive and sellable experiences we offer the travel agent community because of their focus on comfortable accommodations and exclusive experiences. An impressive 58% of Journeys’ Canadian sales were driven by our partner travel agents and advisors, with an average spend of nearly $3,500 per customer.”

In the footsteps of Moorish history
Every city we set foot in on the Discover Moorish Spain itinerary features architectural masterpieces, and in Córdoba the most fascinating and must-see attraction is the Mosque-Cathedral, designated a World Heritage Site in 1984.
With a history spanning eight centuries, it’s believed to have originally been a Roman temple, before becoming a mosque, and later being converted with a Christian cathedral inserted in the centre of the building. Perhaps the most recognizable features are the 365 candy-cane striped arches throughout the interior, of which our tour guide Azahara Serrano Benavente explains there used to be 500 before the creation of the cathedral.
“It’s 24,000 square metres, so it’s bigger than the Vatican,” says Serrano Benavente of the scale of the property.
By the time we reach the final stop of the tour in Seville, which also has a rich Moorish heritage, our memory cards and phones are already loaded with striking images, but we show no signs of slowing down.
The capital of Andalusia ranked No. 1 on Lonely Planet’s Best in Travel list of the top 10 cities to visit in 2018, and one of the top draws is the Real Alcazar, the oldest European palace still in use. Today, many visitors will recognize it as the Water Gardens of Dorne from the TV series Game of Thrones.
As we climb to the top of the adjoining Giralda bell tower, attached to the world’s largest Gothic cathedral, we’re rewarded with sweeping views of the Spanish city – and the cameras continue to fire.
By the end of the tour, no one wants to leave. The Journey promised to take us deeper into the destination with more interactions with local experts and immersive experiences, and these are just some of the moments that stick with us.
It’s safe to say there’s a little bit of Andalusia in all our hearts – thanks in large part to the locals and our CEO – and ever so slightly in the form of clogged arteries from all the delicious food we’ve feasted on along the way.

Selling tips
For those looking to increase their National Geographic Journeys bookings, Dunning recommends agents reach out to their Global Purpose Specialist, who can set up webinars and go through the intricacies of the program and what makes it special.
“If you are familiar with Journeys, it’s all about making sure that you understand your clients and they’re the adventurous ones who are still looking for a bit of comfort, but still want to experience and make those human connections on the ground,” she adds.
As For G Adventures’ Europe program, Europe product manager Sofia Montezo says an important selling feature is that the logistics such as transportation and accommodation are taken care of, while clients still have ample amount of time to explore on their own.
“We’ll manage all of those logistics and all of those bookings for you, but then we don’t tie you down in terms of the full itinerary. You have flexibility, you have time to explore on your own,” she says. “The Canadian market is a close second to our US market right now, and over the last four years, the Europe program itself has grown over 108% and our Spain program in the same period has grown about 375%.” 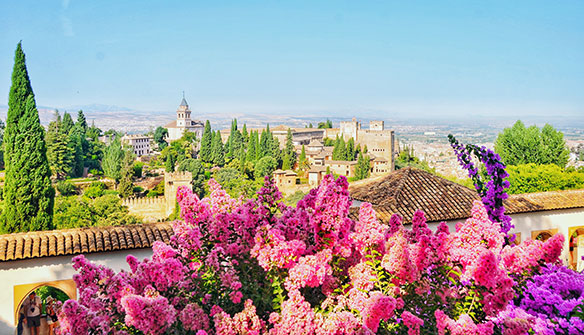