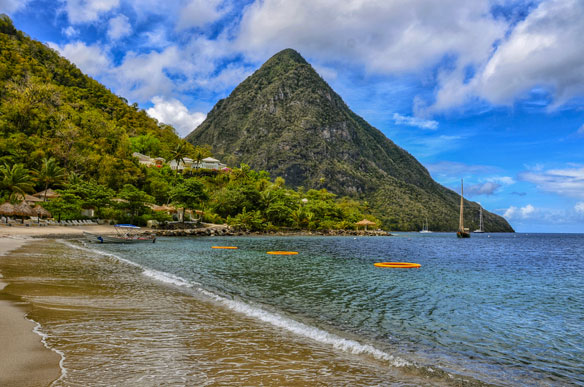 So long and good riddance, Zika. With no detectable levels of the virus found in the region over the past 12 months, the Caribbean Public Health Agency announced the World Health Organization is no longer flagging the Caribbean with an active high-risk category warning for Zika transmission.

For Saint Lucia’s minister of tourism and the newly appointed chairman of the Caribbean Tourism Organization, the announcement is long overdue, with the last reported case of Zika in Saint Lucia dating back to February 2017.
“It should have been done a long time ago,” Dominic Fedee tells Travel Courier. “I think that the health authorities have been cautious and they wanted to make sure that all of the checks and balances were done, but it is welcoming news to have been declared Zika-free. It really should have been done several months ago, but we’re very pleased however, and we continue to work in tandem with all health authorities to ensure that the Caribbean remains a very safe place for people to come.”
The Caribbean Public Health Agency (CARPHA) lobbied the World Health Organization to reclassify member states from Category 1 (having active Zika transmission) to Category 3 (having no Zika transmission), giving evidence that the Zika virus transmission in the Caribbean had been interrupted for more than a year.
According to the organization, the data was supported by findings from Canada, the United Kingdom, Europe and the US who reported that Zika had been undetected for over 12 months in travellers returning from the Caribbean.
As the mosquito-borne virus is linked with causing severe birth defects, CARPHA said the Zika classification was having an adverse impact on the Caribbean.
“The Caribbean is the most tourism-dependent region in the world,” Dr. James Hospedales, executive director, CARPHA, stated in a release. “It is also one of the most popular honeymoon destinations worldwide, and ongoing cancellations due to the classification of most Caribbean countries as Category 1 is hurting the industry unnecessarily.”