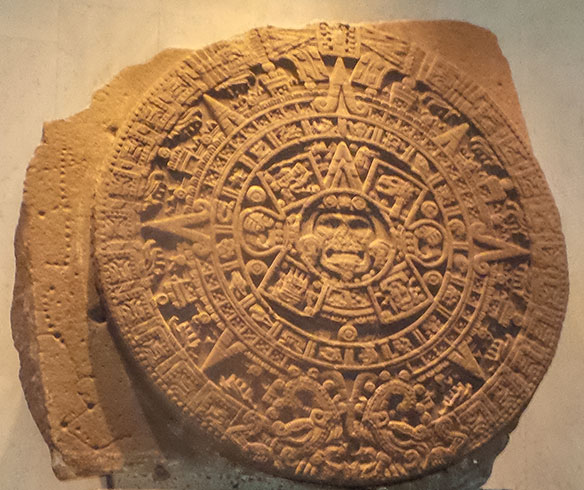 (Photo above: Reminders of the Aztec civilization can be seen in the National Museum of Anthropology in Mexico City.)

Aeromexico is eager to be a bridge between this country and destinations south of its homeland, with the Mexican carrier serving 18 points in Central and South America, reaching cities as far south as Quito and Lima.

The carrier has double-daily flights from Montreal, Toronto and Vancouver to Mexico City, with late-night departures available from each of those cities, meaning passengers can reach the Mexican capital in time to continue to Central and South American points the same day they arrive in Mexico City. “We definitely need to emphasize our schedule and connectivity more,” says Michele Martinson of Aeromexico’s Toronto office.

The service can seem attractive to those who want to bypass the United States on their trips to Latin America.

“I think connecting by Mexico City is seamless and that makes it a great jumping point to connect to Central and South America,” Martinson says.

Aeromexico will also link Mexico City and Calgary from May 31 to Sept. 16.

The SkyTeam carrier has 43 destinations in its Mexican network, some of them leisure destinations, others business ones. Major Mexican vacation locales are also served by charter companies, but Martinson says those wanting to vacation in Mexican oceanside retreats should consider Aeromexico as a transportation option. The “full-service carrier” offers three levels of service from this country and also offers those who want a broader look at Mexico Mexico City stopovers, something charters don’t do, she notes.

Aeromexico’s longest Canadian presence has been in Montreal, with the carrier linking that city and the Mexican capital for seven years. Martinson says the carrier has been building its Canadian profile but “we have more branding that needs to happen in Canada.” Aeromexico will present the award for World Music Album of the Year during March’s Junos music awards, which Martinson says is a “really good opportunity for Aeromexico to get visibility.”

Nevertheless, Aeromexico is carrying a growing number of people between the two countries, with the Montreal route seeing 43% more passengers in 2017 than it did the previous year, while passenger loads on the Toronto route were up 48% and Vancouver loads rose 46%.

Summer’s approach means that the number of VFR passengers on Aeromexico’s Canadian routes will increase. Martinson says her airline also carries business travellers between this country and Mexico, including people working in the petroleum sector.