Discover an ocean ‘teeming with life’ with Adventure Canada 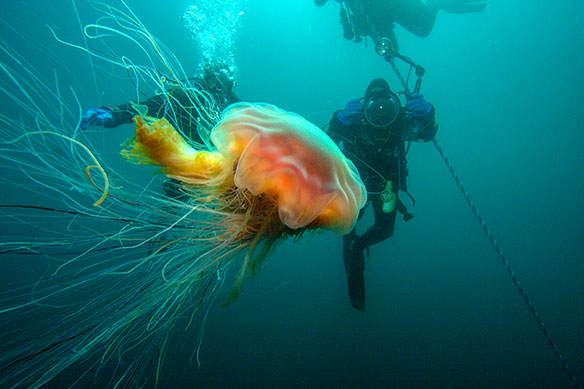 Devon Bayly-Jones has given Arctic diving her seals of approval.

The Adventure Canada employee among other things oversees the tour operator’s diving program, which has participants don dry suits and then enter frigid Nunavut, Greenland and Newfoundland waters during the company’s June-October northern cruise season.

And says the Ontario-raised Bayly-Jones, who has dived around the world, divers who go on Adventure Canada’s northern sailings may find themselves sharing the water with a variety of different creatures, including some that are feathered, and others that are finned.

“The Arctic Ocean is teeming with life,” says Bayly-Jones, who reports underwater exploration enthusiasts may spot the likes of seals, beluga and humpback whales, ducks, and a host of other creatures.

Fantastic visibility
“The water can be crystal clear, allowing for fantastic visibility. We dive along the sea floor among the kelp and sculpins. The cold-water corals are surprisingly colourful, with pops of white, yellow and pink. We dive near grounded icebergs too, and last year, we dove in the same fiords as pods of beluga whales. The 24-hour sunlight allows for fantastic photography opportunities. We surfaced, surrounded by eider ducks and dove around brash ice that had recently calved from nearby glaciers.”

“Diving in the Arctic takes specialization and skill, but once you acquire these skills, there is no limit to where you can dive and what adventures you can have,” she says. “Everything from shipwrecks, diving among seals and whales and ice to visible continental divides. Diving in the polar regions attracts curious divers looking for beauty, as well as a challenge.”

Testing the limits
Adventure Canada has teamed up with Newfoundland’s Ocean Quest on its dive program, with Ocean Quest supplying the weights, tanks and divemasters. Divers bring their personal gear.

The maximum group size is 12. Zodiacs – each of which can hold six divers and their gear – are used.

Bayly-Jones – whose work and travels have taken her through much of Asia and Latin America – is convinced that those who do visit the North will appreciate it, regardless of whether they strap on fins and tanks.

“Once you experience the North, meet the people, view the wildlife and witness the dramatic landscapes and ice, you will want to return,” she says. “The same goes for divers who have experienced what it is like to dive in the serene waters of the North, testing their limits in one of the most remote places you can dive. It’s beautiful, and I wish more people had a chance to experience it.”