Home › Digital Post › Africa may benefit from being hurricane-free

Africa may benefit from being hurricane-free 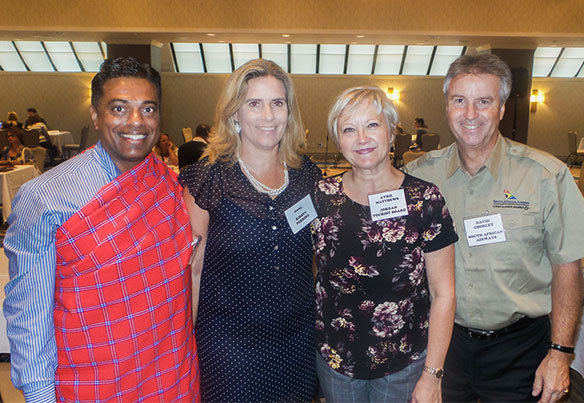 (Pictured above: Among those at the Goway Travel Toronto event were Sam Cottar and Kirsty Perring of Goway, Avril Matthews of Visit Jordan, and David Chorley of South African Airways.)

Could Africa and the Middle East look increasingly attractive to Canadians seeking hurricane-free havens?
Just possibly, say some of those on hand for a recent Goway Travel event in Toronto showcasing those two regions.
Africa and the Middle East – both of which have often had to contend with their own image issues over the years – may be able to attract Canadians who recently heard daily reports of the Caribbean – traditionally popular with vacationers from this country – being pummeled by hurricanes.
“I hate to say it, but they might,” Uniglobe agent Ethel Hansen Davey of Africa and the Middle East possibly luring more Canadians. She believes South Africa is in a particularly good position to attract more Canadians because it’s fairly high profile and seen as safer than many other African countries.
Kirsty Perring, Goway’s acting general manager, Africa and the Middle East, said Africa can also benefit as terrorism continues to plague parts of Europe, making some people uneasy about travelling there. “Africa was long deemed as a dangerous destination, but is now seen as a safer destination,” said Perring, who added that her company isn’t trying to capitalize on Caribbean misfortunes.
Some countries on Africa’s east coast have to contend with powerful storms, but nothing approaching the intensity of hurricanes that have battered parts of the Caribbean this year, Perring said.
She said Goway’s Africa business is growing quickly, with South Africa leading the way.
The Middle East is also attracting more interest but at a slower rate.
Perring added Egypt – which has seen its tourism trade suffer in recent years because of security concerns – “is definitely coming back.”
Avril Matthews of Visit Jordan said that country has “noisy neighbours,” but she didn’t see “any signs of unrest in Jordan during her own visit
there in May. The visit convinced her that Jordan’s a very safe and welcoming country where Western women will feel very comfortable.
Matthews added that Jordan’s Red Sea resort community of Aqaba can “easily compete with any beach resort” in the Caribbean.
David Chorley, who oversees South African Airways’ Canadian operation, also expects South Africa will benefit over unease Canadians may have about travelling to some other parts of the world at this time. “As a result of some of the things happening in the world, South Africa will continue to see an uptick in travel.”
Meanwhile, Toronto travel agent Roger Boyajian said he believes Africa and the Middle East may well look attractive to travellers who are concerned about hurricane damage. “That’s why I came [to the event],” he said.