Cusco remains a showcase for the Inca empire 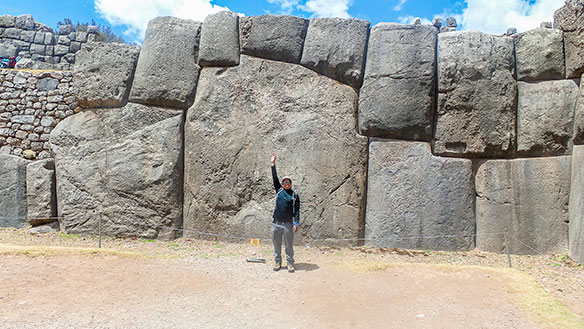 (Pictured above: explora Valle Sagrado guide Angel Layme stands before a massive boulder that forms part of a wall at the Inca complex of Sacsayhuaman in Cusco.)

“How could primitive people have handled these huge blocks?”
—Erich von Daniken in his 1970s best-selling book Chariots of the Gods.

Erich von Daniken’s suggestion that extra-terrestials might have been responsible for Cusco, Peru’s massive Inca complex of Sacsayhuaman is now scoffed at by archeologists, but a basic question remains: How did the Incas slot massive, asymmetrical boulders that at times weighed over 100 tonnes so carefully together that, in the words of one visitor, “you couldn’t slide an envelope in between them.”
And Sacsayhuaman is just one of the many intriguing sides to the lofty Andean city of Cusco that served as the capital of the Inca empire, which was toppled by a Spanish invasion that set out to destroy that empire.
Cusco reached its zenith in the 15th century and then fell to Francisco Pizzaro and his fellow conquistadors in the 16th century. Today, it’s home to several hundred thousand people, most of them descendants of an Inca empire that at its height included at least parts of Colombia, Ecuador, Bolivia, Peru, Argentina, and Chile within its boundaries.
Although the conquistadors destroyed much of the Inca architecture and looted gold ornaments that decorated many Inca structures, today’s visitors will find the Inca heritage is alive and well in Cusco, and is often intertwined with conquering Spanish influences. The city core’s streets still have the original Inca design and rather than tearing down sturdy, earthquake-resistant Inca walls, the Spanish often built on top of them, creating buildings where the two architectural styles are clearly contrasted.
Cusco – which translates as navel as its founders considered it the “navel of the world” – is clearly a city discovering its Inca roots. In 1992, an eight-storey tower with a massive statue of Inca emperor Pachukuteq – credited with spreading the Inca empire far and wide – was completed, and visitors can now scale the tower for a commanding view of the area. Tourists will also find streets bearing Quechua – the language spoken by the Incas and their descendants – names and a monument near the city centre is dedicated to those who resisted the Spanish conquest and those killed during it.
Sacsayhuaman is a tourism highlight, a three-tiered structure said to have been shaped like the head of a puma, after which Cusco was modelled. The complex was once much larger, with many of its boulders removed by the Spanish to make their own structures and leaving behind “basically the boulders too big to be removed.”
“This looks like a huge puzzle,” Angel Layme, a guide with the explora Valle Sagrado lodge, says of the remarkable stonework. Sacsayhuaman once had several towers and is now 360 metres at its longest point. Visitors can see the so-called Inca’s Throne, from which parading Inca solders were reportedly reviewed. Sacsayhuaman also plays a pivotal role in the revived Inca Festival of the Sun on June 24, the most important date on the Inca calendar.
Another Cusco high point for tourists is the Church of Santo Domingo, built on top of what was the Inca Temple of the Sun. Visitors will see precision Inca stonework at the base of much of the church and in many of the interior walls. Gold sheeting that covered many of the walls is long gone, having been melted into gold bullion and shipped back to Spain.
“Cusco is the place where you will find the most spectacular architecture in Peru,” says Elisabeth Hakim of Peru tourism board PromPeru.
One of Hakim’s predescessors in turn labels the city the “Florence of the Americas.”
Cusco’s cathedral’s claims to fame include a massive painting of The Last Supper showing Jesus and the Apostles sitting down to a dish of roast guinea pig, a traditional Andean delicacy. Including the guinea pig in the painting was seen by some as a symbol of resistance.
Those visiting tourism-oriented Cusco will find many restaurants, bars, stores and tour companies.
The area surrounding Cusco is rich in Inca ruins, with the towns of Pisac and Ollantaytambo among major draws for those interested in Peru’s past.
Train service links Cusco with Aguas Calientes, the town found near the base of the mountain on which the Inca retreat of Machu Picchu is found. Machu Picchu can be visited from Cusco on day trips.
(www.explora.com)
(www.promperu.gob.pe)