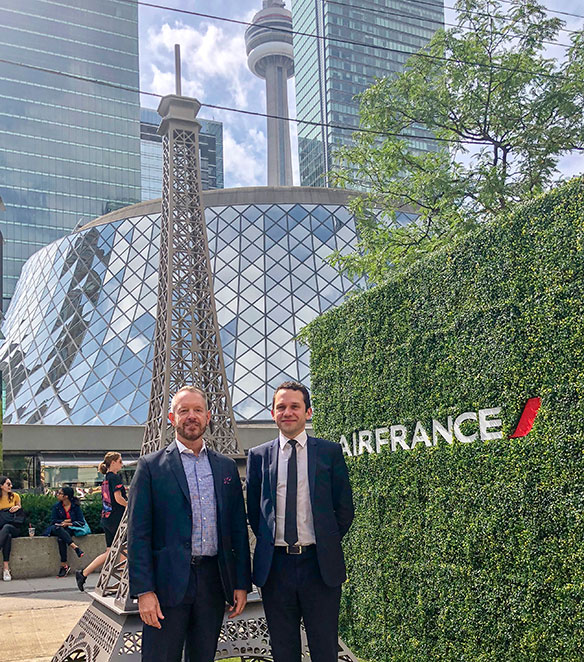 Once again, Air France – the official airline of the 2018 Toronto International Film Festival (TIFF) – welcomed festival-goers at its Air France Bistro on Festival Street Sept. 6-9, and also used the opportunity to introduce its new vice-president and general manager in Canada to a select group of travel trade personnel.
With the Air France Bistro pop-up Parisian-style café – including a four-metre-high Eiffel Tower – as the back-ground, the new vice-president and
general manager Air France-KLM Canada, Vincent Etchebehere told the gathering, “We are pleased to be able to add a little French touch in the middle of Toronto and proud to sponsor the Platform program and present the award to the winner of this category aimed at showcasing the next generation of filmmakers.”
Etchebehere has an ambitious five-point priority plan for Air France–KLM’s operations and brand building in Canada.
“It is a very exciting time for Air France–KLM globally, but especially here in Canada,” said Etchebehere. “We want to be a true leader in the airline industry in terms of an unprecedented level of service and customer intimacy.”
His idea of customer intimacy, and his first priority, is breaking down traditional barriers and using technology to bring the customer closer to front-line service providers.
For example, since the beginning of 2018, Air France-KLM has been employing tablets at each of their five Canadian stations – Edmonton, Calgary, Vancouver, Toronto, and Montrea – to check in and board customers.
This innovative process is less about the tool and more about creating a new customer experience that brings the agent out from behind the desk and in closer physical proximity to the customer, providing an overall more pleasant, less stressful customer interaction.
Etchebehere’s second priority is to continue strengthening the existing Delta, KLM, Alitalia and Air France partnership. The result of which is more destination and scheduling options for travellers, and a seamless, simple booking experience for travel agents. As far as the trade is concerned, Air France–KLM is one extended family: one voice, one face, one contract. Expect Air France–KLM and Delta to announce a 15-year renewal of their joint venture as of April 1, 2019.
Thirdly, Etchebehere is working to promote the 15-million member strong Air France-KLM loyalty program, Flying Blue. Last year saw Flying Blue’s inclusion of WestJet. Now, member-travellers can earn and burn points with any Air France–KLM partnership or WestJet flights.
“Joining forces creates benefits for members,” says Etchebehere. “With WestJet, there is the possibility to seamlessly connect Air France or KLM tickets with flights operated by WestJet on 81 routes through Canada and US.”
The fourth point in his plan, and a personal priority, is to improve pick up to Africa.
“I didn’t have this in mind until I arrived in Canada, but the potential is really impressive,” explains Etchebehere. “Year to date in 2018, total industry growth from Canada to Africa is more than 7%.”
Steven Larkin, director sales, Canada for Delta Air Lines, agreed with Etchebehere adding, “Africa is the next continent. It’s a forgotten market in the industry, but it is growing immensely in the corporate segment and leisure space, and KLM is well placed to capitalize in this market.”
The last new Air France route from Canada was added three years ago with Vancouver to Paris, but at the present time, there are no plans to open any more new routes. Instead, the priority for Etchebehere is to increase capacity on existing routes.
“At the moment, we’re operating three daily flights from Toronto to Europe – two daily to Amsterdam and one daily to Paris,” explains Etchebehere. “Beginning at the end of October, we’ll be increasing from seven to nine flights weekly from Toronto to Paris, that’s 10% more seats year over year.”