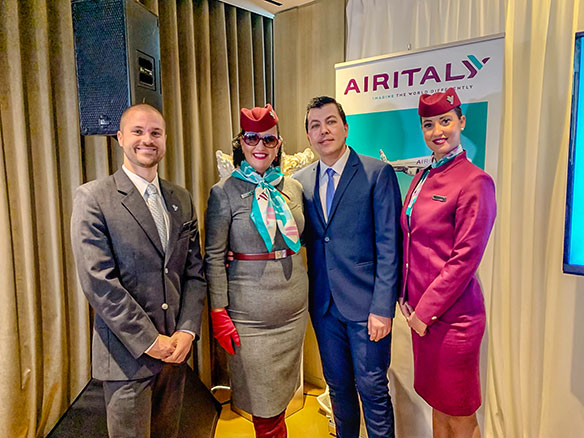 (Photo above: Air Italy’s COO Rossen Dimitrov is joined by Pam Ann, the alter-ego of Australian comedian Caroline Reid, during a Toronto gathering, along with Air Italy crew members Elia and Roberta.)

Air Italy is taking off in Canada with the inauguration of non-stop service between Toronto and Milan.

Service between YYZ and its operating base in Milan Malpensa will then resume next summer, when Air Italy’s Chief Operating Officer Rossen Dimitrov told Travel Courier the airline, “will evaluate at that time the opportunity to continue year-round.”

The new route is serviced by the Airbus A330-200 with 24 flatbed seats in business class and 228 seats in economy.

“Bringing our A330 to Toronto was absolutely outstanding, it was almost unreal coming home,” said Dimitrov, who hails from Canada. “It’s been something that we have worked on for such a long time and finally being able to bring the aircraft to Toronto Pearson was outstanding for us.”

Air Italy connects to 21 destinations, and has seven codeshare partners including British Airways, Iberia, LATAM and Qatar Airways, across 24 destinations.

“Air Italy connects seamlessly with seven key Italian cities – Rome, Naples, Palermo, Catania, Lamezia Terme, Olbia, and Cagliari – from its Milan Malpensa hub, which are all top destinations for summer tourism thanks to wonderful locations such as Capri and Sorrento, Taormina and the Greek Temples in Agrigento, the white beaches of Sardinia and the amazing landscape of Calabria,” he said, noting the airline is fully owned by AQA Holding (51% Alisarda and 49% Qatar Airways). “A lot of work has gone into Air Italy, in revamping and rebranding the airline, changing our fleet, redesigning our product, training our people, it’s almost like creating a new airline.”

“We need to have representation dedicated to Canada, focused on the Canadian market. We need to have someone dedicated and paying attention to the travel trade here,” he told Travel Courier. “We’re the new kid on the block here in Canada, we would like people to get to know us better and we need the trade to help us. We need more awareness from the trade.”

Overall, Dimitrov said the airline has a simple ambition: to be different, which he believes comes down to the product, the service and standing out from the crowd as a brand through its people.

“Our software is our people. We’re very proud of our people, we’ve invested very heavily into training everyone, people who operate especially in our business class cabin have undergone so many different types of training from emotional intelligence to service delivery and the same for our economy class,” he said. “There are so many airlines now around the world, a lot of them deliver mediocre service. They take you safely from point A to point B, but we wanted to create something different. Obviously, safety is a priority for us, but at the same time, we wanted customers to experience a different type of air travel by focusing on the customer, and creating an extraordinary experience.”

Some of the distinguishing features of the airline include a dine anytime concept in business class, where guests can choose when and what they want to eat. Business class passengers can also take advantage of free inflight WiFi and full turn-down services with pajamas, slippers and duvets. Even in economy, passengers can enjoy gelato and pizza, and on-demand inflight entertainment.

“I hope more people will take the opportunity to fly with us and experience who we are. And, as an airline, it’s not all about the marketing gimmicks, and so on, it’s about delivering on what you promise, so for us it’s always to be able to deliver consistency,” he said. “We continue to innovate, we continue to add new products, we continue to invest in our people, so as I said, we’re a different type of airline; and if you’ve travelled with us, you will get the opportunity to imagine the world differently.”

And while it’s not all about marketing gimmicks, the airline is making a splash with a new partnership with Pam Ann, the comedic airline hostess alter-ego of Australian comedian Caroline Reid, who was on hand to entertain the crowd during the Toronto launch event in celebration of the new route. Pam Ann is the new global brand ambassador for the airline.

“Pam Ann is an airline industry legend,” he said. “We are delighted to have her on board. Caroline’s irreverent wit and humour, her cult-following both inside and outside the industry, and her insightful comedy will undoubtedly help us grow our brand and fanbase. This new partnership will clearly enable us to reach new audiences around the world in a variety of different ways, and we are very grateful that Caroline has chosen to work with us on this project as we grow and develop Air Italy.”