Boracay cleans up, but closes down 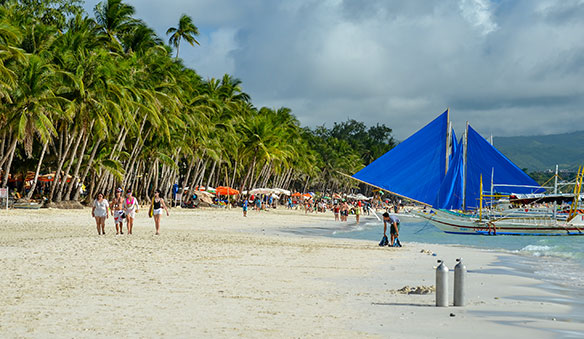 (Photo above: The wide beach at Boracay is a busy place, with perfect fine white sand.)

Airlines that operate flights to the Philippines are now making changes to frequencies and schedules to account for the unprecedented closing of Boracay, the nation’s most popular resort island. Boracay will be closed to tourists for six months as of April 26, in order to execute a massive environmental rehabilitation and rebuild of its overloaded waste disposal infrastructure.
Based on the numbers, Boracay is the top holiday destination in the Philippines, attracting about two million domestic and foreign visitors per year. They come for the island’s perfect white-sand beaches, warm waters and energetic nightlife scene.
But Boracay’s natural beauty has led to extensive overcrowding and overuse of its resources, compounded by an overloaded garbage and waste treatment infrastructure. The beachfront itself is pristine, but uncollected garbage is evident just a few hundred metres inland from the waterfront, and the waste disposal systems are failing.
In mid-February, Philippines president Rodrigo Duterte ordered an urgent cleanup of Boracay, calling it a “sewer pool.” His threats to close the island to ensure compliance with the order have now been realized.
Airlines that serve the Philippines, including the flag carrier Philippine Airlines, have since announced scheduling changes. PAL will scale down its services to Caticlan and Kalibo airports (which service Boracay) for a six-month period beginning in late April and running until Oct. 27, while resorts on the island are closed. 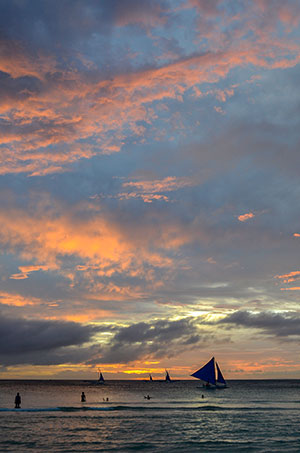 Sun sets on Boracay Island in the Philippines.

No rebooking fees
“We are allowing passengers booked to Boracay to reroute without charging rebooking or reissuance fees,” said Allan Coo, the international sales manager for Philippine Airlines in Canada, based in Vancouver. “We can reroute them to any of our domestic or international destinations. If the airfare is the same, we do not collect any fees. But if the new route or itinerary results in a higher fare, we will collect the fare difference.”
Coo said PAL is still operating the same frequency of flights to Manila from Vancouver and Toronto. Vancouver-Manila continues on a non-stop, daily basis, while the Toronto route remains at four times a week, also non-stop.
Coo adds that “fortunately, there are a lot of other islands that our passengers can visit. Boracay is just one of the many beaches in the Philippines.” On that note, PAL has announced that it will expand flight frequencies to a number of other Philippine tourist destinations during the six-month period to support the continued growth of domestic tourism. For instance, more frequencies will be added on routes from Manila to Cebu, Iloilo, Puerto Princesa and Bacolod.
“Boracay is a national treasure,” said PAL president Jaime J. Bautista. “We fully support the government’s intention to make Boracay
fully safe and environmentally friendly. Sustainable development is of critical concern, and we are one with the laudable goal to revert the island to a balanced ecotourism paradise. We seek the understanding of our passengers in this multi-sector endeavour. In the long term, a safe and revitalized Boracay will benefit all stakeholders in the travel and tourism sectors, and the Filipino people as a whole.”
While the long-term benefits to Boracay are assured by the clean-up, the short-term effects are forecast to cause hardships to businesses on the island, many of which of rely on tourism.

Tourism industry impacts
Stakeholders like the Philippine Tour Association, Philippine Travel Agencies Association, Tourism Congress of the Philippines and other hotel and marketing professionals on Boracay have predicted losses of about US$1 billion due to the closure.
And they suggest that it will have far-reaching effects on tourism across the entire nation. This is because Boracay is the number one holiday destination in the Philippines, and even its temporary closure may cause significant damage to the Philippines tourism image as a whole, they say.
But, while tourists may be disappointed, it is the businesses, workers and residents on Boracay itself who are facing the greatest hardships. “There are a lot of people whose livelihoods will be impacted,” said Coo. He added that tourism affects the whole economy of a destination, not just the hotels, airlines, guides, hotel employees, restaurants, bars, shops, etc.
He also noted that the closure has impacted PAL, with estimated losses in the millions of dollars due to the cancellation of flights.
Other airlines that have made changes due to the Boracay closure include SilkAir (Singapore Airlines partner carrier) which is offering full refunds to customers on flights to Kalibo booked up to Oct. 31. The airline is also offering the option of rebookings to other destinations in Southeast Asia with no additional booking fees in the same seat class, subject to availability. Similar choices are being offered to passengers who have bookings with budget airline Scoot (Singapore).
Budget carrier AirAsia is offering Boracay-booked passengers the options of a full refund, a no-charge destination change, rescheduling or a credit that can be applied for a future flight. AirAsia says it will increase the number of flights to popular alternative destinations in the Philippines, including Palawan, Bohol, Cebu and Davao.