New Hampshire can easily host the ‘shop till you drop’ crowd 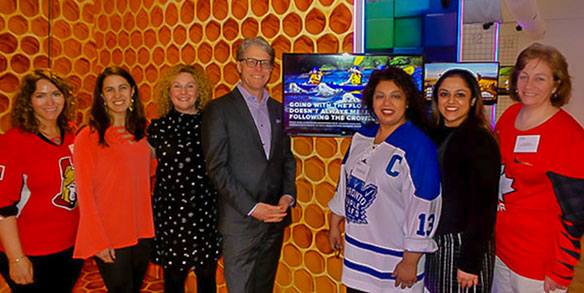 (Photo above: On hand in Toronto for a New Hampshire event were Ashton Marcus of Reach Global Marketing, which represents New Hampshire in Canada; Michele Cota, Victoria Cimino and Taylor Caswell of State of New Hampshire, Department of Business and Economic Affairs, Division of Travel and Tourism Development; Charmaine Singh and Varuni Sakhalkar of Global Reach Marketing; and Kris Neilsen of the Division of Travel and Tourism development, who, like Marcus and Singh, was sporting a hockey jersey in support of the Humboldt Broncos.)

New Hampshire tourism authorities are selling a destination in which buying is a prime attraction.
The state promotes itself as a shopping mecca, thanks in part to its being one of only five US states that don’t have a sales tax, and tourism officials say that helps offset the current gap between the Canadian and US dollars.
“We’re making sure they provide value to Canadians,” Michele Cota of the State of New Hampshire, Department of Business and Economic Affairs, Division of Travel and Tourism Development, said during an April 12 Toronto gathering.
That value can include many hotels taking Canadian money at par and some having special packages that may include a dinner or entrance to an attraction when the properties are booked.
A state that borders Canada notes that it has many outlet shopping opportunities that feature brand names.
“There’s lots of ways to spend money in New Hampshire,” joked Victoria Cimino, director of the Division of Travel and Tourism Development.
Cimino added her state is the “most forested state in the United States per square mile. Because of that we are an outdoor recreation playground.”
Hiking, cycling, cross-country and downhill skiing in a state that has many ski resorts and seasonal whale-watching are among the available outdoor activities, said Cimino, adding tourists can be in a mountainous part of the state and then on an Atlantic Ocean beach shortly after.
Among state mountains is Mount Washington, the summit of which is billed as the windiest spot on the planet. Taylor Caswell, commissioner of the Department of Business and Economic Affairs, reported the mountain – the highest peak in the northeastern United States – reaches 6,200 feet, with the treeline found at 4,000 feet. The upper reaches of the mountain have an “alpine-tundra”-like environment, said the energetic Caswell, who’s cycled to the top. The top – which has anchored structures to hold them in place from the wind – can also be reached by car, hiking paths and train.
Officials noted that New Hampshire can be easily visited by Canadians heading to Boston, with that city being around 40 to 45 minutes from the New Hampshire border.
Canada accounts for more than 80% of New Hampshire’s international visitors, with 335,000 visiting in 2016.