Symphony of the Seas

Dare to dream aboard 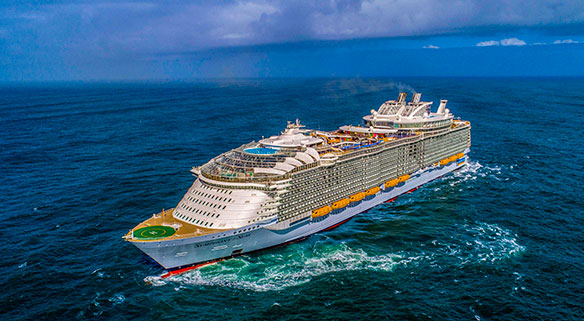 (Photo above courtesy of SBW-Photo) 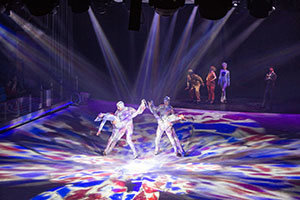 If bigger is better – and many certainly think that’s the case – then Royal Caribbean International continues to be tops at sea with the recent launch of Symphony of the Seas, the world’s largest passenger cruise ship.
The 25th ship in Royal Caribbean’s fleet, the 5,518-passenger (at double occupancy) Symphony of the Seas is 228,081 gross registered tons, measures 238 feet tall and spans 1,188 feet long. It has 18 decks and 2,759 staterooms.
Like its sister ship, Harmony of the Seas, the newest Oasis Class vessel includes seven distinctive neighbourhoods – Central Park, Boardwalk, Royal Promenade, Pool & Sports Zone, Vitality at Sea Spa & Fitness Center, Entertainment Place, and Youth Zone. Other returning favourites include the Ultimate Abyss, the tallest slide at sea starting at Deck 16 and twisting its way down to Deck 6, The Perfect Storm, Flowrider, Escape Room, Wonderland, and the AquaTheater.
New features include Hooked, Sugar Beach, Playmakers, El Loco Fresh, Glow-in-the-dark Laser Tag, and the two-storey Ultimate Family Suite.
“Symphony will take family vacationing to an all-new level with energy and options never before found in one place,” said Michael Bayley, president and CEO, Royal Caribbean International. “This ship is the perfect blend of our greatest hits we know guests love and a lineup of vibrant new restaurants, activities and unparalleled entertainment – all purposefully designed around vacationers’ preferences.”
Symphony is slightly bigger than Harmony, making it the new world’s largest passenger cruise ship.
Speaking on the size of these new ships, Richard Fain, chairman and CEO of Royal Caribbean Cruises Ltd., said they didn’t set out to build the world’s largest ship, they set out to build the world’s best ship.
“To create memories and experiences, it sometimes takes a little more space,” he said.
He also stressed that the ship is just a tool, albeit “a wonderful tool,” and helping make the most of travellers’ vacations is the crew and the level of service available.
But, it’s not all about “big” on the Symphony, it’s also about the attention to detail and the little things, like having the pleasure of running into the “Stowaway Piano Player” on an elevator – or, occasionally even in a bathroom – for a customized performance. This mysterious performer literally pops up anywhere that takes his fancy to entertain guests. 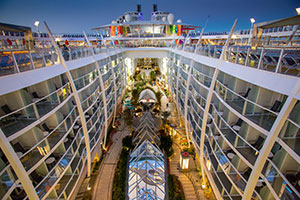 Hooked Seafood: Located in the Solarium, this upscale eatery serves up the real taste of New England-inspired seafood with a menu featuring classic coastal favourites such as lobster rolls, crab claws, signature fish sandwich and a raw bar.
Playmakers Sports Bar & Arcade: Stretching the length of a reimagined Boardwalk, the whole family can watch the home team play across 31 big-screen TVs, during the day and into the late night. The indoor and outdoor arcade is packed with more than 20 games and features a menu of classic American bar food such as wings, burgers and popcorn shrimp, as well as craft beers and cocktails.
El Loco Fresh: Made-to-order tacos and burritos wrapped with fresh tortillas are among the Mexican “street food” favourites available here.
Sugar Beach: The signature candy and ice cream shop is the sweet spot on the Boardwalk with more than 100 types of candies, a lineup of ice cream flavours and even DIY activities for the aspiring culinary artist.
Other specialty dining venues include Chops Grille, Jamie’s Kitchen, Solarium Bistro, 150 Central Park, and Izumi Hibachi & Sushi.

Battle for Planet Z: Royal Caribbean’s first glow-in-the-dark laser tag game brings two teams of eight head-to-head in an out-of-this-world adventure to determine who will claim the last planet in the galaxy.
Escape the Rubicon: In the ultimate race against the clock, friends old and new must band together in the Rubicon submarine – a sophisticated, custom-built escape room – to solve a collection of puzzles before time
runs out.

New and a first for Royal Caribbean is the introduction of the Ultimate Family Suite, a two-level, 1,346-square-foot suite filled with thrills for the whole family. Features include an in-room slide, a private cinema with an 85-inch HD TV, a floor-to-ceiling LEGO wall, a 212-square-foot balcony complete with table tennis, and a full-sized whirlpool.
Complete with a Royal Genie, who caters to every whim, the suite sleeps eight, has three bathrooms and seven televisions.
“If the kids are happy, the parents are going to be happy,” said one official.
Rates are said to range from US$45,000 to US$80,000 for a week. 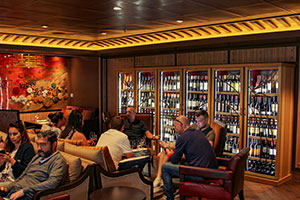 Royal Caribbean continues to push the boundaries of what’s possible in entertainment with the debut of cutting-edge productions on stage, in the air, under water and on ice on board Symphony of the Seas.
Headlining the playbill is the all-new show “Flight: Dare to Dream,” a one-of-a-kind journey through the past, present and future of air travel and space exploration “that will make history as one of the most ambitious stage productions to date.” Guests take off on a spectacular adventure through time, chronicling key milestones in aeronautics, beginning with the first leisure voyage to Mars and ending with an homage to the Wright Brothers’ first flight at Kitty Hawk.
A Royal Caribbean Productions original, “Flight: Dare to Dream” introduces 3-D flying technology, video and automation to the 1,401-seat Royal Theater.
“We continue to push the envelope with high-tech, immersive entertainment at Royal Caribbean, and we couldn’t be prouder with how “Flight: Dare to Dream” has brought to life the awe and wonder of flying,” says Nick Weir, vice-president, Entertainment, Royal Caribbean International. “Guests from five to 95 years old will not believe their eyes, as all our shows on-board Symphony capture their imagination and create jaw-dropping ‘I-can’t-believe-that-just-happened’ moments they won’t soon forget.”
Three additional headline shows across three distinct stage venues include:
1977 in Studio B, the continuation to “1877,” the ice-skating show introduced on Harmony of the Seas, featuring the time-travelling hero, Tempus. Timing is everything in this imaginative original ice show, featuring high-tech projection mapping images that bring the ‘70s to life on the ice.
Hairspray, performed in the 1,380-guest Royal Theatre, gets a makeover for Symphony of the Seas with new choreography and staging of the Tony Award-winning musical. The show features 3-D flying technology used by aerialists, as they literally soar above the crowd, plus acrobats and professional divers.
The AquaTheater is the distinct high diving, acrobatic performance space found only on Royal Caribbean’s Oasis Class of ships, featuring an open-air amphitheatre overlooking the ocean and a performance pool – the deepest at sea – with hydraulic lifts and 10-metre diving platforms.
Symphony also boasts three main pools, a water slide complex, kiddie aqua park, two rock climbing walls, a basketball court, miniature golf course, casino, and much more.
Symphony of the Seas will homeport in Barcelona, Spain for the summer, visiting Palma de Mallorca, Spain; Provence, France; and Florence/Pisa, Rome and Naples, Italy.
Beginning Nov. 10, Miami will become the ship’s year-round home port, offering seven-night Eastern and Western Caribbean cruises with call including Perfect Day at CocoCay, Royal Caribbean’s new destination in the Bahamas.
(www.RoyalCaribbean.com/SymphonyoftheSeas) 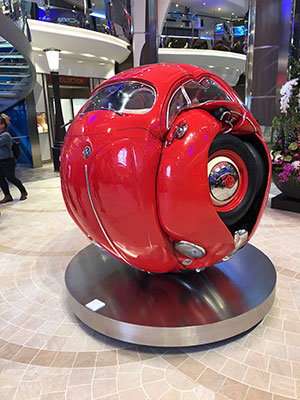 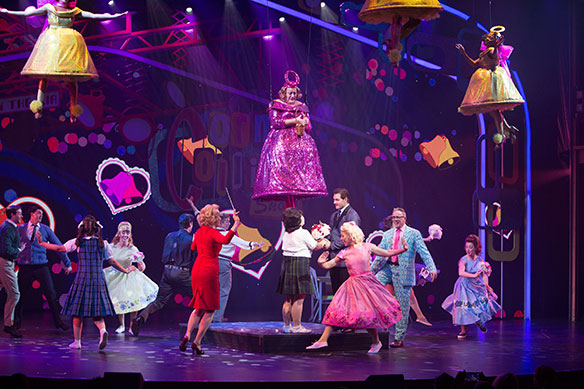