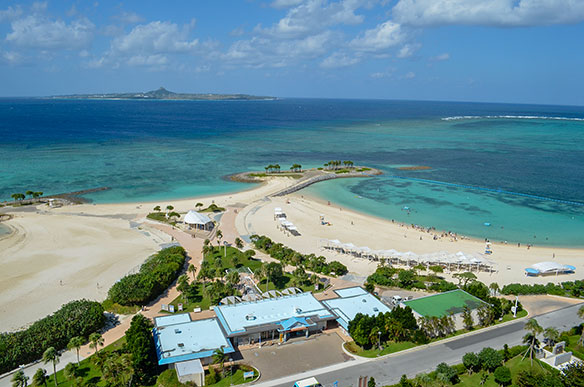 (Photo above: Kourijima Beach on Kourijima Island is linked to Okinawa by a short bridge.)

New tour programs that feature the Japanese island of Okinawa are now coming to market, following the operation of a successful agent fam trip there late last year by ANA (All Nippon Airways).
This type of travel trade fam promotion with Okinawa was a first for ANA from Canada. As a result, more Canadian travellers are
discovering the unique charms of a place that is better recognized for its ties to the US military, at least in North America.
But in Asia, Okinawa is known for a host of qualities that make it an attractive option for visitors from mainland China, Hong Kong, Taiwan, and more. And it is, of course, a relaxed, rural holiday option for Japanese domestic travellers.
Those in the know come to sample a slice of Japanese life that has some key differences from the “mainland” island of Honshu. There is a slower pace on Okinawa, with a more rural aspect that makes it feel light years from Tokyo.

Okinawa tour programs
In designing their programs, tour operators applied their experiences of Okinawa, emphasizing both the natural and cultural highlights of the destination.
The island is the largest in the chain that meanders south from Honshu. There are beaches and bays, eco-parks and a world-leading aquarium. Delicious Japanese cuisine has its own Okinawa aspects, and the sake has similar distinctions. The main city of Naha has an easy-going vibe, given its connection to both the ever-present sea and the nearby countryside.
“Personally, I think Okinawa is a very relaxing place that you can enjoy freely,” says Amy Wong, a travel consultant for Jade Tours
in Vancouver.
She was on the Canadian fam trip and has since created an Asia itinerary that features three nights in Okinawa, plus visits to Tokyo and Hong Kong. As well as hotel stays, the Okinawa portion of the itinerary includes a rental car, said Wong.
That encourages clients to conduct their own road trips around the island, which is only 110 km long, and about 12 km wide.
The tropical attractions of Okinawa have a priority in the itinerary of Royal Scenic of Markham, Richmond and Quebec. “Okinawa is gaining international popularity, with coral reefs that provide great snorkelling and diving spots,” says the Royal Scenic literature. The seas surrounding Okinawa’s islands are considered amongst the world’s most beautiful, with abundant marine wildlife. Consequently, snorkelling and scuba diving are among Okinawa’s top attractions.
“But if you prefer to see beautiful fish without getting wet, Okinawa also has a fine aquarium,” says Royal Scenic, pointing to the spectacular Okinawa Churaumi Aquarium.
Other coach tour attractions on the program include Shuri Castle, the former Japanese Navy underground headquarters, Okinawa Peace Memorial Park, Gyokusendo Cave, Okinawa World, Kouri Island, and Ocean Expo Park, amongst others.
Royal Scenic also emphasizes that Okinawa’s climate is subtropical, with temperatures that rarely fall below 15C in winter. “Okinawa is a great destination for Canadians during our winter months,” says Vicky Ho, the general manager at Royal Scenic, which is selling a package that features both Tokyo and Okinawa.

Marco Polo
Okinawa was already on the holiday product inventory at Marco Polo Tours of Vancouver, and a revised Okinawa program has been introduced for 2018.
Although he didn’t participate on the fam trip, given his experience with selling the destination, company president Jackie Ma has some relevant observations.
“Safe, clean and unique, the laid-back lifestyle stands out,” says Ma, noting that Okinawa has become a favourite for Asian
travellers. “It is a destination very much favoured by Hong Kong celebrities,” he said.
Marco Polo does not promote Okinawa as a single destination, but rather offers it as part of a Japan tour (e.g. Tokyo/Osaka) or en route to Hong Kong and/or Southeast Asia.
“We have Okinawa bookings by tourists who are taking a side trip from Hong Kong due to its relatively close proximity of a 2½ hours flight time,” said Ma. 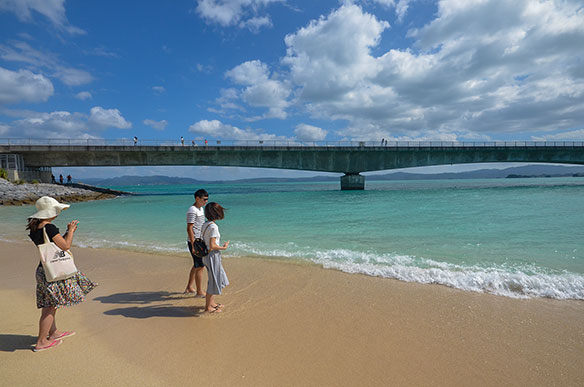