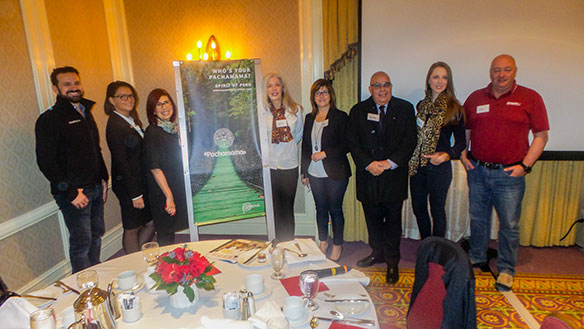 Peru is getting ready to bring a new tourism message to the world about a country on the verge of becoming more accessible to a growing number of Canadians.
Elisabeth Hakim, incoming tourism coordinator for North America and Britain for Peruvian tourism board PromPeru, told a Toronto audience last week that the upcoming campaign will be launched Nov. 6 in London at World Travel Mart, a massive international showcase for the tourism industry.
And that upcoming campaign will come less than a month and a half before Air Canada begins linking a second city in this country with the Peruvian capital of Lima.
Hakim said Peru is “thrilled” that Air Canada has decided to continue what was initially planned as temporary Toronto-Lima service. The carrier also plans to begin twice-weekly Montreal-Lima service on Dec. 16.
Peru hopes to see 7 million international visitors a year by 2021.
Peruvian tourism officials are highlighting the likes of adventure tourism opportunities in Peru, cultural sides to a country that has many still-standing reminders of the Inca civilization, the natural side of a nation that is mostly Amazon Basin and Peruvian cuisine. “In Peru, you just don’t eat nicely,” Hakim said. “You eat healthy.”
Hakim noted that the www.peruagent.com free Peru specialist program features videos, trips and has other features that can help travel agents better sell Peru.
Hakim earlier told Travel Courier that, while the mountaintop Inca retreat of Machu Picchu is an “iconic” symbol of her homeland, Peru has many other points of interest. Tourists tend to be quick to associate Peru with the Andes, but most of the country is in fact Amazon, with Hakim saying the “very pristine” jungle region has lodges and national parks. Exotic jungle creatures include pink dolphins, monkeys, caimans, jaguars, and a host of birds.
Upscale jungle cruises are also available, she noted.
Those exploring the Amazon can also view some of the indigenous cultures that make it their home, Hakim added.
www.peru.travel