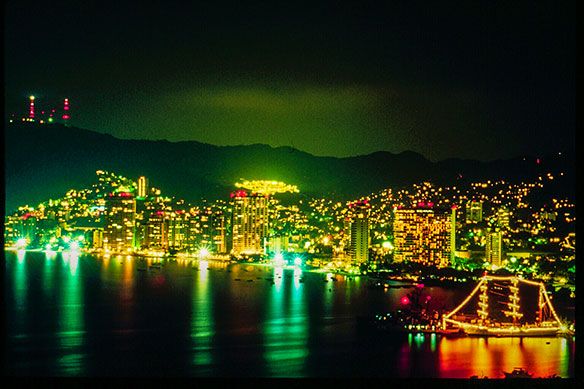 (Photo above: Acapulco Bay at night.)

The company has acquired the Grand Hotel, a high-rise property found on downtown Acapulco’s main street and which overlooks Acapulco Bay.

The hotel was previously a Hyatt.

The property will be reborn in November as an AMResorts Dreams resort, one of only a few high-rise resorts the company – known for its upscale all-inclusives – offers.

AMResorts is spending over $20 million to convert the hotel into a Dreams, with Dreams promoted as being suited for romantically inclined vacationers. Work – which will include new dining options – is being staggered to allow the hotel to remain open.

The Dreams name will appear on the property in November, but AMResorts is now taking bookings for it.

“It’s exciting,” AMResorts’ Jan LaPointe said of the upcoming resort, adding the actual structure is an “Acapulco icon that offers spectacular views of Acapulco Bay.”
She said the renovations are going to give the property a “really fresh, contemporary design.”

LaPointe added that the “very romantic” Dreams brand attracts couples, who can either come with or without children.

AMResorts president Gonzalo del Peon said Acapulco is happily welcoming AMResorts’ arrival in the city. The city primarily hosts Mexican tourists now, having lost ground to other parts of Mexico when it competes for foreign arrivals.

But del Peon suggested other hotel companies may become interested in an Acapulco presence now that AMResorts – which has resorts on Mexico’s Caribbean and Pacific coasts and on some Caribbean islands – is soon opening one of its brands there.

“We should be able to attract more every year,” he said. “It’s good news for the destination.”

Piquis Rochin of the Acapulco Destination Marketing Office said that tourism board is “very excited” about AMResorts’ decision, adding that the company clearly has confidence in Acapulco’s future. “They do not take risks,” she said. “We are very happy.”

AMResorts now has around 36 hotels in Mexico and others on such Caribbean destinations as the Dominican Republic and Jamaica. Del Peon said further openings are in the works, with Secrets St. Martin Resort & Spa slated to open in March 2020, while the Breathless Cancun Resort & Spa will also open in 2020, and the Breathless Tulum Resort & Spa in 2021.