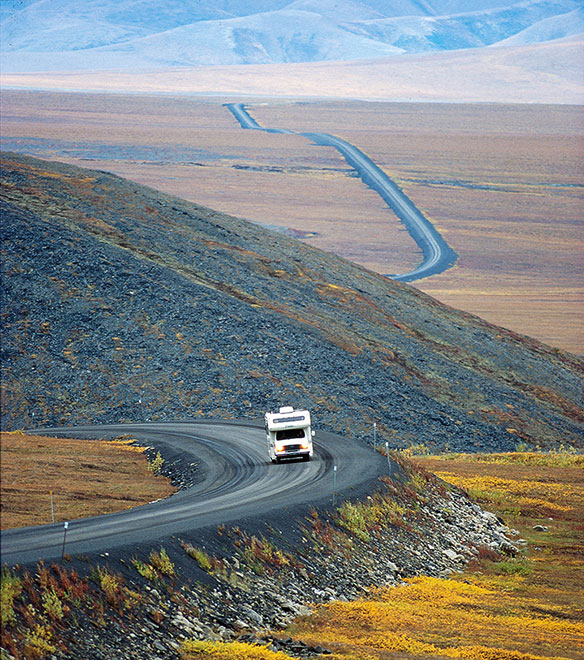 The Calgary-based tour operator includes among its Tours of Distinction one that travels up the Dempster Highway – which links Dawson City, Yukon Territory, with the Arctic community of Inuvik, NWT – and then heads farther north still on a highway that opened last year, linking Inuvik with coastal Tuktoyaktuk.

Being able to deliver people to Tuktoyaktuk means Anderson can now send clients to the Arctic Ocean along with the Atlantic and Pacific Oceans, notes the company’s Darcie Guarderas.

Anderson Vacations underwent a change in ownership three years ago, which was accompanied by a new strategy. The company continues to have FIT travel, but Guarderas says it is paying increased attention to fully escorted small group touring.

Company choices include its Classic Tours, which limit the number of people to 28. The “very inclusive” packages include all attractions, Guarderas reports, and guests will find “clean and comfortable hotels” in Canada and Alaska.

Tours of Distinction limit group size to 21, and Guarderas says clients can find “off-the-beaten-path destinations in Canada and Alaska.”

A particularly popular Tours of Distinction destination is BC’s Haida Gwaii, with the coach tour reaching the destination once known as the Queen Charlotte Islands by ferry. While there, an Indigenous woman prepares a traditional meal for the Anderson Vacations clients and tells them about her family and the area.

Visitors may spot the likes of whales, eagles and bears in a part of the world known for its rain forest.

Guarderas says her company will happily design tours for groups, including family and church groups.

And she also says her company doesn’t want to offer run-of-the-mill vacation experiences, noting that FIT travellers who visit Whitehorse, Yukon, can try their hand at glass-blowing.

The tour operator – which sends people to every province and territory – offers the likes of the Yukon, Yellowknife and Churchill, Man., for those eager to see the Northern Lights. Dog-sledding is among activities for those visiting Yellowknife in the winter.

Guarderas believes more Canadians should “discover their own backyard,” saying they don’t need to bring their passports and won’t encounter unknown currencies, and it can produce very exotic experiences. For instance, someone living in the West may find visiting Quebec City akin to going to Europe, except that it doesn’t require a trip “over the pond,” she says.

“I think the 150th anniversary of Confederation celebrations really brought to life how beautiful our country is,” Guarderas says.

Meanwhile, Anderson also has a South Pacific program that includes Australia, New Zealand, Fiji, Tahiti and the Cook Islands. Some people might be wary of the likes of Tahiti, worried that it’s expensive, she says. But Guarderas, who’s visited the Polynesian destination, says people often think of the famed overwater bungalows when thinking of Tahiti, but adds there are other forms of accommodations – such as guesthouses – that she says are considerably cheaper.