Home › Digital Post › A remarkable past, a golden future

A remarkable past, a golden future 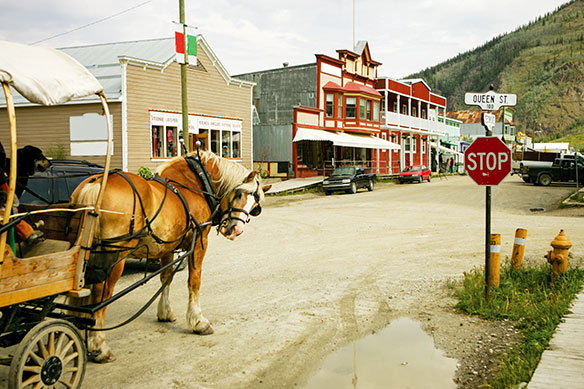 There are strange things done under the midnight sun – and when it comes to Dawson City, some unusual things are done when daylight is in shorter supply as well.

Paul Robitaille, marketing and events manager for the Klondike Visitors Association, Dawson City’s tourism promotion board, notes that among available libations for those visiting the Yukon’s “city of gold” is the sourtoe cocktail, with people visiting The Downtown Hotel’s Sourdough Saloon drinking alcohol from a glass that also contains an embalmed human toe.

The name is a play on sourdough, with those who travelled to Dawson during the Klondike gold rush dubbed sourdoughs because sourdough bread was a staple of the town’s diet.

Dawson City was founded when gold was discovered just before the turn of the 19th century, with the Klondike gold rush reaching its apex in 1898 and Dawson becoming the largest city west of Winnipeg for a time. Most of those who travelled there for the gold rush drifted away soon after, causing the town’s population to dwindle.

But Robitaille says the gold rush past is still immediately evident, with those who stroll along wooden sidewalks viewing structures built during Dawson’s heyday and which fall under federal jurisdiction as Klondike National Historic Sites.

Dawson City highlights include the Palace Grande Theatre, which has summer vaudeville shows; the cabin of Robert Service, who penned the likes of The Shooting of Dan McGrew and The Cremation of Sam McGee; Jack London’s cabin, relocated to Dawson from elsewhere in the Yukon and which is a reminder of such Yukon novels as The Call of the Wild; and the sternwheeler Keno, which plied the Yukon River long ago.

Visitors are also welcome to try their luck at Diamond Tooth Gertie’s, which during the summer has both gambling in what may be Canada’s oldest casino and can-can dancers. The likes of weekend talent shows are staged during winter, and gambling continues during that season.

Money earned by the casino goes into tourism promotion.

A light at night

Robitaille notes that Dawson City is careful about preserving its 19th-century appearance, with a heritage committee’s approval needed for building projects.

Robitalle says there’s still widespread interest in the Klondike gold rush, noting Canada’s Wonderland theme park in Ontario this year opened a Klondike-themed roller coaster called the Yukon Striker. The nature of the coaster was such that its arrival even earned mention on CNN.