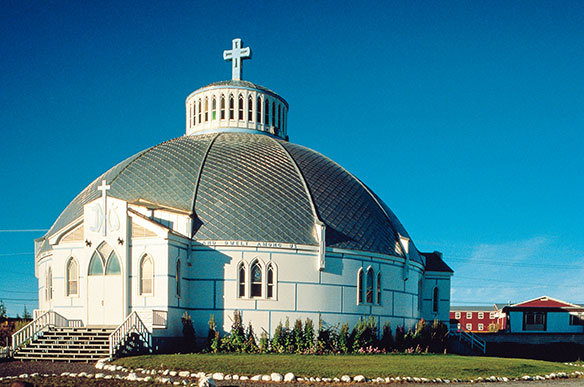 Northwest Territories tour company Tundra North Tours is inviting those who want to see see the northernmost fringes of mainland Canada during winter a form of accommodation that’s pretty cool, but which won’t stand the test of time.

The company, which sends people to the northwestern mainland reaches of the Northwest Territories and the Yukon’s Herschel Island – offers those who work their way north during winter a chance to spend one or more nights in its “Igloo Village,” a cluster of igloos that it builds outside of Inuvik when winter rolls around and which remain in place until warming spring weather melts the ice structures.

Each of the igloos can sleep several people and and two are used for cooking.

Heaters and blankets help people remain warm, with inside temperatures likely to be a little above freezing.

A Tundra North Tours staffer will be on hand in the village in case anyone finds things a little too chilly.

“This is exactly what our ancestors slept in,” says Noel Cockney, who’s with the Inuit-owned company.

The Igloo Village is built each winter about 12 kms from Inuvik, reachable by a wintertime ice road that links Inuvik and Aklavik.

Inuvik has a choice of hotels with modern amenities, but Cockney says those eager to overnight in an igloo are looking for a cultural experience. “We give them the opportunity to have that connection.”

Most who opt for an igloo stay are from the South and only spend one night in one.

Inuvik and the surrounding area see more southern tourists during summer than they do in other seasons, but Cockney says there are people wanting to visit during winter, the most “iconic” Arctic season.

And, Cockney quite sensibly points out, those who dream of an igloo stay have no choice, but to visit the Mackenzie Delta outside of summer, with warming spring weather certain to turn each of the sturdy igloos Tundra North Tours builds “into a puddle.”

Tundra North Tours – which aims to familiarize visitors with the “vast wilderness and Indigenous cultures” of the Arctic – has numerous tours available outside the winter, one of which takes clients along the Dempster Highway – which links Inuvik with Dawson City, Yukon – another which offers a boat cruise through the Mackenzie Delta, known for its meandering canals; and others which showcase the coastal village of Tuktoyaktuk.

More information is available at tundranorthtours.com.