Home › Digital Post › Camaguey is a showplace for Cuba’s past

Camaguey is a showplace for Cuba’s past 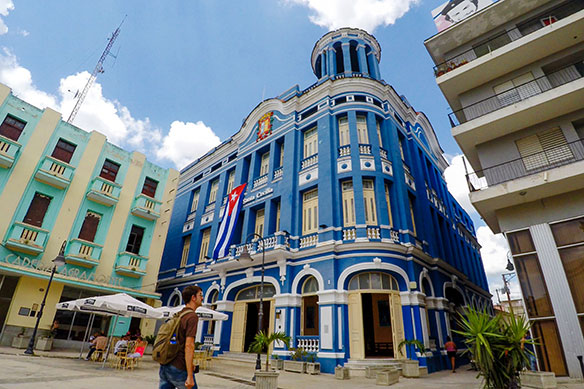 The Cuban city of Camaguey is making Havana look like something of a youngster.

“We celebrated the city’s 505th anniversary last February,” he notes of a destination founded in 1514.

Viamontes Borras concedes that many considering Cuba vacations aren’t familiar with Camaguey, which he notes is one of Cuba’s first seven cities and has a municipal layout not found elsewhere in the country, with locals dubbing the layout “the broken dish.”

Visitors will find a mix of colonial, Art Deco, Art Nouveau, mid-modern and modern architecture, with Viamontes Borras adding that he thinks “eclecticism is the one that defines the city.”

“Camaguey is regarded as a Cuban culture stronghold,” he continues of a city whose historic centre has earned UNESCO World Heritage Site status. “If you decide to come, do not miss a visit to the Ballet de Camaguey headquarters. A bicitaxi [pedal cab] tour around the city is also highly recommended, and, while sightseeing, check the great talent of local painters and sculptors.”

“This city is the birthplace of many important poets, artists, writers, musicians, famous patriots, and talented scientists,” adds Miguel Hernandez Fernandez of local tour company Gestour Travel & Events. He adds that local churches and museums have “treasures of art” from the 17th, 18th and 19th centuries.

Escape to the beach

Viamontes Borras says tourists can choose from three types of local hotels – classic ones, structures of historic importance or outstanding architecture that were converted into hotels; Meliá properties; and budget properties.

Those venturing to nearby Santa Lucia Beach can find more than 1,000 hotel rooms that belong to all-inclusives. The city and the beach also have some 300 rent houses.

Viamontes Borras notes Santa Lucia Beach is near the “northern coral reef, one of the largest and best preserved in the whole world.”

He adds visitors can find nature reserves, and the northern cays are seeing a major tourism project.

Those wanting more information on Gestour can go to travelgestour.com.