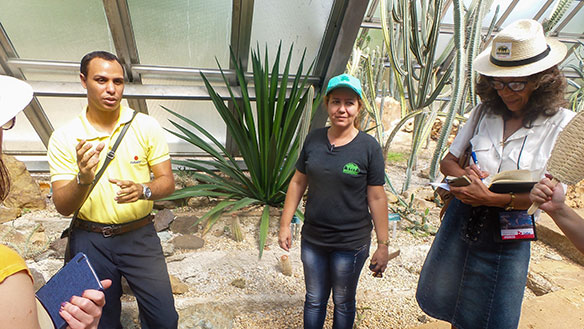 The Havana-area National Botanic Garden amounts to a Garden of [tropical, desert and Japanese] Delights.

The facility, found some 25 kms from downtown Havana, is reportedly one of the 10 largest botanical gardens in the world at 550 hectares and has greenhouses showcasing the likes of tropical plants and others from dry climates, with vegetation from Yemen’s desert-like landscapes among those in the latter category.

A Japanese garden is another feature in an attraction that has over 3,000 species of Cuban and tropical plants, among them 250 types of palm trees, 90 of them native to Cuba.

“This is one of the most natural places we have. It’s like a symbol of Havana,” Cubatur guide Vladimir Galloso says of the sprawling attraction, which opened in 1968.

The garden’s Aleli Morales Martinez notes the National Botanic Garden is home to such exotic plants as elephant ears – so named because of their size and shape – coffee and pepper plants and others seen as having medicinal qualities.

The attraction can open early for birdwatching groups, who may spot hummingbirds and other avian creatures.

International Association of Botanical Gardens president Tim Entwisle visited the Cuban garden in 2018 and praised Cuba for its “strong commitment to plant conservation and to plants more generally.”

Meanwhile, she praises Cuba for its biodiversity, noting the country has eight types of forest and thousands of species of plants, many found only in Cuba.

Indeed, around 10 new plant species are discovered each year in Cuba, she reports.