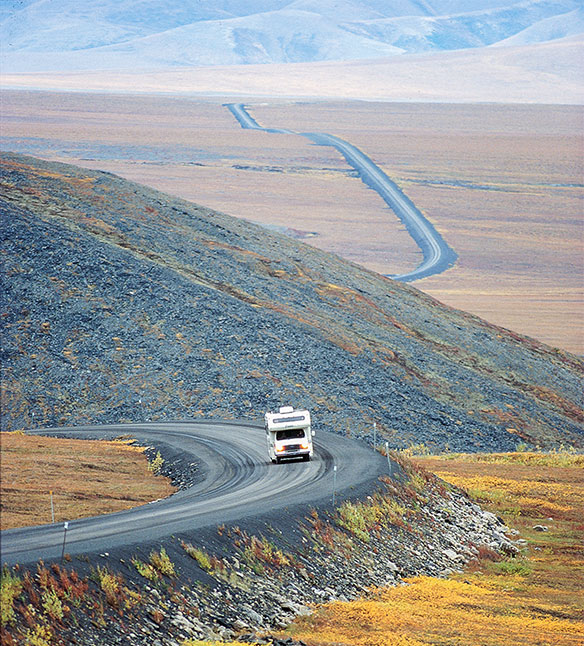 Anderson Vacations has a Canada program that reaches from sea to sea – to frozen sea.
The tour operator – which has been sending people to jurisdictions ranging from Newfoundland to British Columbia – plans to use a new gravel highway linking Inuvik, NWT, with Tuktoyaktuk, NWT, to send people to the very northern edge of mainland Canada in 2018; and in doing so, enabling them to experience the lifestyles of those whose ancestors called the area home long before the likes of Inuvik even existed.
Inuvik, a carefully pre-planned community built as a government centre in the 1950s on the east side of the Mackenzie River Delta, has had road access to the south for decades, thanks to the Dempster Highway, which links the Arctic community with Dawson City, Yukon Territory.
Tuktoyaktuk, on the other hand, has previously only had road links to the outside world when the Mackenzie River freezes over, enabling the creation of a seasonal ice road between it and Inuvik.
Anderson Vacations plans two eight-day trips – one in April and the other in June – to Tuktoyaktuk, dubbed Tuk by locals.
“One of the major factors that went towards putting these tours together was our close working relationship with Kylik Kison Taylor, an innovative and enterprising Inuvialuit entrepreneur who is doing so much on several fronts to bring the benefits of carefully controlled tourism to these culturally and environmentally sensitive Arctic areas,” says Anderson Vacations vice-president Jai Mukerji.
Mukerji adds the company realizes that “taking large numbers of ill-informed and under-prepared visitors can have serious negative consequences for the region,” and Anderson is committed to working in partnership with local entities and “engaging local residents in a mutually beneficial long-term partnership and, equally important, educating visitors on aspects of local culture and environment in a time of rapid change.”
April’s trip begins in Whitehorse, YT, and includes a visit to that town’s Indigenous Cultural Centre before participants fly to Inuvik – home to among other things the eye-catching, igloo-shaped Our Lady of Victory church – and then continues on the new gravel highway to Tuk. While there, visitors can sample local cuisine and meet locals, learning about their way of life and “hearing folk tales handed down through generations.” They’ll also be invited to help build an igloo.
Sightings of the Northern Lights may be available as well.
The tour ends in Inuvik, coinciding with that town’s annual festival, The Muskrat Jamboree.
Participants on the June tour – who will actually travel right from Whitehorse to Tuktoyaktuk by road – can dip their toes in the Arctic Ocean, taking advantage of the warmer June weather that leads to much of the ice in that water body melting during summer.
“Participating in one of these tours will be a life-changing experience,” Mukerji states.