Home › Digital Post › Back to school with Adventure Canada

Back to school with Adventure Canada 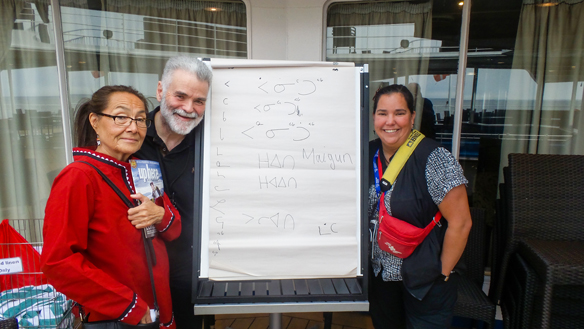 Pictured above: Standing beside a sheet that offers some Inuktitut are Martha Flaherty, John Houston and Adventure Canada culturalist Heidi Langille.

Adventure Canada clients who sail through Nunavut waters have a good shot at spotting a natsiq or a nanook, while scanning the terrain on any given day.

And, if those clients accept Adventure Canada’s invitation to dabble in the language of the descendants of the territory’s first inhabitants on their sailing, they may be able to converse with them to some degree in their own tongue as well.

A recent High Arctic cruise that explored Nunavut and Greenland waters offered an Inuktitut 101 class that was followed by a second that offered participants a chance to progress further in the language.

The classes were given by Martha Flaherty, born in northern Quebec and raised in the High Arctic, and who grew up speaking Inuktitut, and John Houston, originally from Nunavut as his parents moved there and became prominent in Inuit art circles, and who’s easily at home in Inuktitut.

Participants will be given instruction on grammar, sentence structure and vocabulary, with the latter possibly including the names of northern creatures, such as the seal (natsiq) and polar bear (nanook).

They can also learn how to write the likes of their names in the Canadian Indigenous syllabics using Inuktitut alphabet. Adventure Canada clients are given English name tags, and those taking the Inuktitut classes are invited to write their names on the tags in the northern language as well.

But how much progress can an Adventure Canada guest expect to make during the cruise in a language that he or she likely has had little or no exposure to prior to their vacation?

“They sort of amazed themselves and they were amazing us (Houston and Flaherty) also,” he says of some of the more proficient students.

Flaherty, whose grandfather Robert Flaherty was the creator of the movie Nanook of the North, says those who pick up some Inuktitut on the Ocean Endeavour shouldn’t hesitate to use it when they go ashore in area communities, as doing so will help them bond with locals.

“They [Inuit] love it and they appreciate that people are interested in Inuit culture and language,” she adds.