Every holiday is a surfing holiday 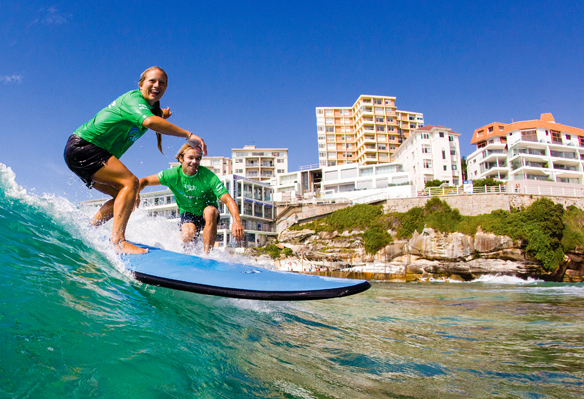 When in Rome, do as the Romans do.

And, adds Craig Wachholz, when in ocean-ringed Australia, do as the watersports-loving Australians do.

And that, Wachholz continues, includes hopping on a surfboard and riding some waves.

Wachholz, with Let’s Go Surfing, which offers surfing lessons in the Sydney area and Byron Bay, the most easterly point in Australia, says surfing has become very much a part of Australian culture.

“All you have to do is go to a beach at 5 or 6 a.m. (and see all the surfers at those early hours to understand how popular the sport is),” he says.

Wachholz, who goes by the moniker Wacca (“in Australia everyone gets their name shortened. Been called that since school – unpronounceable surname”) and visited Toronto recently as part of a Goway Travel South Pacific delegation, says Let’s Go Surfing has been something of a pioneer in the arrival of surfing schools and offers instruction for both beginners and those wanting to improve their skills.

The company has different surfboards to match the different heights of clients.

It’s based in Sydney-area Bondi Beach, arguably Australia’s most famous beach, and has a large number of instructors.

Being skilled at the likes of skateboarding or snowboarding doesn’t automatically translate into being at home on a surfboard, he continues, adding surfing has many variables that include waves and currents.

Wacca, who began his surfing days at the age of three riding on his father’s back, suggests those interested in learning a sport that’s built a worldwide following and are in Australia for a month or more might consider five two-hour lessons that should provide them with a basic level of skills.

He’s confident that those wishing to learn can do so, noting that Let’s Go Surfing has helped teach physically challenged people the sport.

Wacca says those who learn how to ride waves rarely lose interest in it, citing his own family as proof.

“Every holiday is a surfing holiday,” he says. “We don’t leave home without a surfboard.”

More information is available at letsgosurfing.com.au.