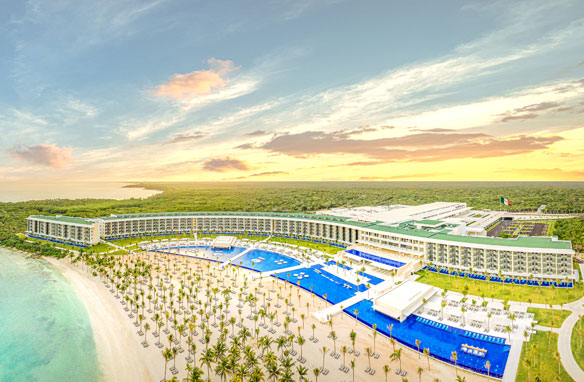 Barcelo says guests at its newest Riviera Maya property will find plenty of activities if they’re the sort of people who like to keep busy while on vacation.

What they won’t find, however, are plenty of youngsters running around.

The sixth addition to Barcelo’s impressive presence in the Riviera Maya is an adults-only resort, with Barcelo deciding on going that avenue with the property because of client requests.

The company’s Luis Chaverri says there are those who think an adults-only resort might be somewhat uninteresting, but he quickly disputes that, saying guests will find a large number of activities, ranging from water sports to dance classes.

Barcelo opened the Barcelo Maya Riviera in December, with the 850-guest unit resort the largest of the now six resorts that collectively form a 3,610-guest unit presence.

Chaverri says those staying at the upscale new addition will find plenty of dining options and bars at their disposal, with the Barcelo Maya Riviera featuring what he labels a “stay-at-one-play-at-six” policy that gives them a choice of 27 restaurants and 27 bars. French, Italian, Japanese and Spanish are among dining options.

“We have everything here,” Chaverri says. “It’s a destination in itself. You don’t have to leave the property (to be entertained). You can stay here two weeks and not get bored.”

Chaverri adds that guests will also be able to appreciate Mother Nature’s handiwork, with the entire Barcelo presence fronting two kilometres of the type of beach that’s at the core of the area’s tourist trade. Somewhat difficult access from the bordering stretches of beach mean Barcelo pretty much has the equivalent of private beach, he adds.

Barcelo says being something of a pioneering presence in the region meant it was able to secure prime beachfront.

The Barcelo Maya Riviera is the most upscale of the six hotels on the site, with Chaverri stating that Barcelo – which has resorts in many parts of Mexico – is hopeful that its latest Maya Riviera addition will get an AAA 5 Diamond rating. He labels the property “chic, modern and contemporary,” adding guest units feature “super king-size beds” that can be turned into double beds.

Barcelo guests will also find an on-site convention centre that can host 8,000 people, and really “small meetings” and large ones, with ballrooms including a “massive” one.

Chaverri notes that double-decker buses run from 8 a.m. to 2:30 a.m, carrying tourists around the Barcelo site. But the site is also designed in such a manner that tourists can also walk from any one point to another, he adds.

Chaverri’s confident that the latest Barcelo will attract many Canadians, adding Barcelo is a well-known brand in this country, and it’s an “easy sell.”