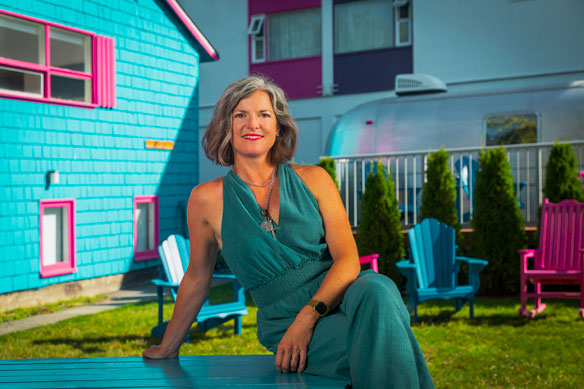 When the pandemic hit, Mandy Farmer felt an immense amount of pressure not to be the one responsible for driving the family business that dates back to 1986 into the ground.

“I truly felt that I was going to be the one to lose the family’s business and that is an amazing amount of pressure to have on oneself. It was after realizing like yeah, I could lose the family business, realizing okay, if we were going down, how do we want to go down? It was from that point we all realized well, let’s go down with our head held high and let’s help as many people as we can,” Farmer, the CEO of BC-based Accent Inns and Hotel Zed, tells Canadian Travel Press. “So, this year has been emotional because we’ve been able to help so many people and to feel really proud of how we’ve reacted during this tough time.”

For example, Farmer sent $250 grocery gift certificates to all employees — including employees that were temporarily laid off in the initial aftermath of travel closures and restrictions.

“My reason for being on this earth is to be a good employer, so first and foremost I’m taking care of my team,” she says. “Second, it’s the fact that I’m a hotelier, I’m nothing without these people. They make us amazing and so as soon as the pandemic began I was really concerned for them, if we had laid off anyone I didn’t know when they’d get the CERB benefits because it was early days, so I just wanted to make sure that they knew I was there for them.”

Another big gesture saw the company hand out full year-end bonuses ahead of schedule.

“We gave them out in September and this is in a year when I’m guessing most bonuses will probably be cut in the hotel industry,” she says. “Again, I really wanted to acknowledge to people that the bonus isn’t necessarily because of profits, it’s because of how you showed up at work and the team showed up this year. They were amazing.”

These selfless traits undoubtedly showcase why Farmer was recently recognized with a RBC Canadian Women Entrepreneur Excellence Award, which celebrates the achievements of the most successful and impactful women entrepreneurs across the country.

“It’s probably the top entrepreneur award in Canada for women so to be chosen in the Excellence category was like oh my god!

I’m a small business technically, we’re just in British Columbia so to be honoured nationally was huge,” says Farmer, who counts her dad, Terry Farmer, as a mentor for instilling the sentiment that “you are nothing without your team.”

Dawn of a new age

Farmer, who took the reins as president and CEO in 2008, says she had no intention of taking over the family business when she was younger.

“Our family business started in construction. My dad worked in construction and when I was about 12 he started the hotels. I did see a dramatic shift in him, like he did become a happier person so I am sure that was influential for me to see that, but my dad always said the family business would never be carried on,” she said. “So, I had no thought of ever following in his footsteps. As it happened, I did.”

Having worked in the hotel industry as her summer job, Farmer took a temporary sales position at the company in the ‘90s after university and “never left.”

“This was very much the days when you’d knock on people’s doors, you didn’t make an appointment, you did cold calling, you just walked in and tried to get the business. During that time, it was also the dawning of the internet and as a company I noticed that we were behind the times. Like it was hard for me to get an email address out of some of the seniors in the company, and the website… So, because it was my dad, it was his business, I was able to say to him, I think we’re missing an opportunity here, and it allowed me to do it. Even though I was just a sales manager, there were always these opportunities for me to work my way up in the company because if I saw something that was worth doing, I had a direct access to the president’s door and he would often say, okay, well, make it happen.”

Long story short, she worked her way up in the company by staying innovative and driving change.

“I kept doing that and eventually I would rise up, becoming the vice president and it was after my years in business that I realized how much I loved business and the hospitality industry and all that. So, I decided to go and get an executive MBA. And it was at that point that I think my dad and I really started talking about leadership, and taking over the family business,” she says. “Once I finished my MBA I did take over from him and become the CEO of the company and once as CEO I was able to be the founder of my own chain, Hotel Zed. And grow the business in that way.” 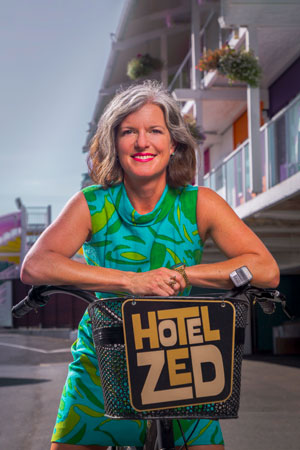 Living by the motto “boring sucks!”, Farmer has ensured the Hotel Zed chain stands out from the ordinary.

“I just find hotels are often so boring and they don’t have to be. So why not take something like a small little closet and create it into something wild? And that’s what we’ve tried to do at all of the Zeds. Really try to imagine craziness,” she says. “It’s about what are the cool experiences that you see in life and can I put that in a hotel?”

What are these cool elements? Inspired by a bike race where the group rode through a bar and had people cheering on either side, Farmer was inspired to include a bike path in the lobby of the Hotel Zed Tofino.

“There’s this great bike path in Tofino that goes from Tofino to Ucluelet and it’s amazing so we just diverted it so you’ve got this fun pink bike path that runs through our parking lot, and it just keeps going into our lobby, and it’s a really fun 1970s swanky lobby with a bike path,” she says. “I’ve been there to watch people on the bike path, and you can see that they come into the hotel feeling like ‘I shouldn’t be doing this,’ and then at the front desk someone goes like ‘Yeah! Woohoo!’ and the smile on their face is huge — it’s pretty cool.”

Meanwhile there are some other elements that guests have to dig a little deeper to uncover.

“Another thing that we’ve got and I’m super stoked about is a secret retro arcade. It is behind a 1970s kind of living room wall and you›ve got to figure out how to get in,” she says. “You won’t even know it’s there because the wall looks so perfect. There’s a hidden switch somewhere that you’ve got to find, maybe it’s pulling a book off the shelf, maybe it’s pulling the knob on the retro TV, and then when it opens electronically and it’s beautifully done and in behind it is a 1970s-style arcade with like Space Invaders and really awesome games.”
Game on!

The fun and creative vibe carries on behind-the-scenes as well with the company’s executive team opting to go by The Care Bears instead, which she describes as “a slightly less lame name for the executive team.”

“These Care Bears, there are six of us, and it’s just amazing who these people are and how we operate. It’s not a normal executive team,” she says. “These people lead with love and there’s vulnerability and inspiration, and fun and laughter, and tears. It’s just so amazing to be surrounded by these five people who see the vision and know what we can be and work tirelessly for it, while also having the most amount of fun possible. That for me is one of the biggest highlights because I want to love my job and isn›t that what we all want to do? Who you hang out with at work is a big part of that. And these people, they do that for me.”

Meanwhile, she recognizes her sales team, who rebranded to The Wolf Pack during the pandemic because of the way they opted to come together, for helping them navigate through a challenging period.

“Rather than be commission based or target oriented, they were like okay, let’s hunt, let’s hunt together, let’s help each other and that team really guided us out of this pandemic,” she says. “They’re fierce and ferocious and creative and inspiring and it was their ingenuity to come up with new ideas that I think led the rest of us to go, yeah, wow, what can we do? Can we rebrand? What else can we do here? Which was really inspirational.”

During this roller coaster of a year, Farmer also opened the Hotel Zed Tofino, which marked her first new build.

“On some days, you’d be putting on different hats. On one hand, you’d be completely cutting costs with the business, but on the other hand I’m putting in a mini disco John Travolta lit dance floor and making all these crazy expensive decisions,” she says. “So, it was a real conundrum at times. You’d be spending so much money yet losing so much money at the same time.”

Although it’s still tough slugging in BC with public health orders not to travel, Farmer says a sense of optimism is starting to build with news of the vaccine rollout. Looking ahead, she stresses how important it is to support the local economy.

“I think in terms of COVID what we’ve all realized is how much more there is to discover in our backyard,” she says. “For the longest time people would set their travel ambitions to, oh, I want to go to Greece, and I think now what we see is that so many of our family and friends took awesome trips in the summer in Canada. Like I really want to check out this neck of the woods, which I think is going to be really important for our industry when we are allowed to travel, I think it’s really important that we choose Canada. We all have pent up demand to travel but let’s also try to keep our dollars here within our nation.” 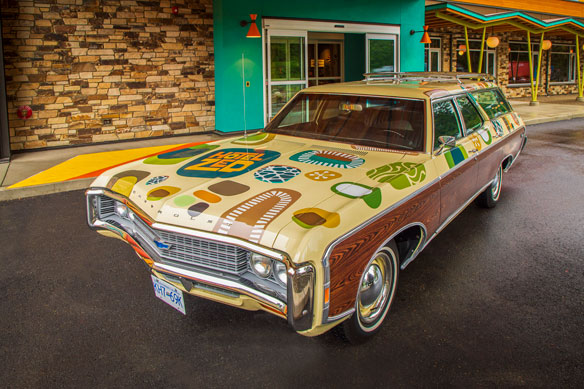