Brew up a great initiative with Kaapittiaq coffee 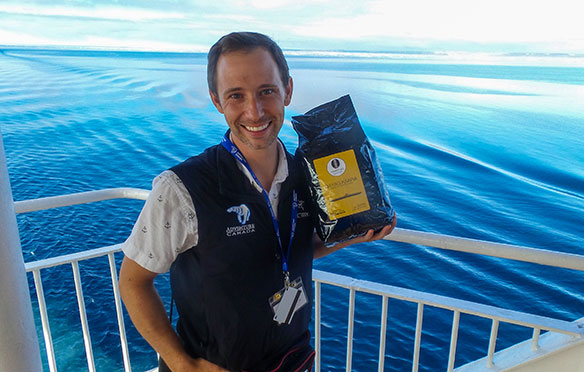 Pictured above: Brian Faber displays a bag of Kaapittiaq coffee on the deck of the Ocean Endeavour.

Adventure Canada clients can help residents of the Nunavut community of Cambridge Bay brush up on their traditional language skills when having a cup of Joe while sailing northern waterways.

The tour company, which has several cruises in Nunavut waters, is now helping the smallish Inuit community mark and sell its own brand of coffee, with 75% of the money earned reinvested in Cambridge Bay programs aimed at helping future generations keep their culture.

So how does a far-north community get involved in selling coffee, a beverage that originated in Ethiopia and comes from beans grown far, far to the south of the Arctic?

“They [several Cambridge Bay residents] were sitting down one day and decided why not sell coffee,” Faber says of a gathering that led to the birth of Kaapittiaq, which translates as good coffee, comes in different-sized bags and is billed as 100% Arabica.

The Cambridge Bay residents teamed up with an Indian community in Peru that grows their coffee beans, which are then roasted and bagged in Barrie, Ont.

Adventure Canada is now selling Kaapittiaq in its gift shop on its Ocean Endeavour vessel and distributing it through its loyalty program.

Adventure Canada clients “love the story” of a remote Inuit community wanting to make its mark in the coffee trade and are happy to support the project, Faber adds.

Eventually, it will be the only coffee served on the Ocean Endeavour, a development that would suit Faber just fine. He now drinks Kaapittiaq at home, as do other members of his family and has no qualms about recommending it to others.