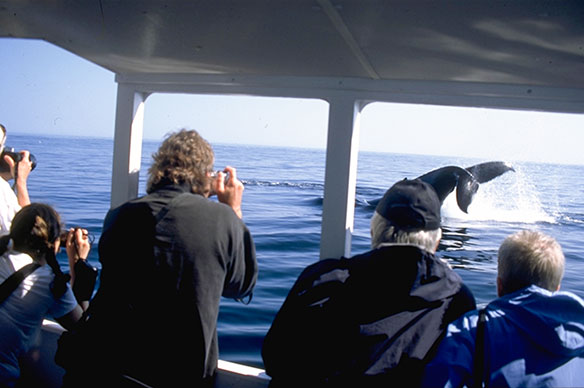 Pictured above: Seasonal whale-watching is available in Newfoundland.

Caroline Swan is inviting people to see the New-foundland region that all the theatrical fuss is about.

Swan, product development manager for Adventure Central Newfoundland, notes it was her region that inspired Come From Away, the musical work that’s won acclaim within and outside this country, recounting how people in the Gander area rallied to the assistance of those on dozens of commercial airplanes suddenly diverted to the interior Newfoundland city in the immediate aftermath of the Sept. 11 terrorist attacks.

The generosity shown by the locals rushing to aid the unexpected visitors received international attention and ultimately inspired the musical that’s working its way around much of the globe.

“It brought a lot of people together in a tragic time,” Swan notes.

Come From Away is raising the international profile of the Gander area, something Swan says is certain to boost tourism.

Those visiting Gander may be able to meet people who were actually mentioned in Come From Away.

“We don’t have tornadoes. We don’t have earthquakes,” she says. “It’s accessible and not heavily developed. It’s extremely calming. There is a sense of space.”

One natural attraction has been dubbed Iceberg Alley, with icebergs from more northerly locales at times drifting by part of the Newfoundland coast. Prime viewing is May and June, with the massive blocks of ice in some cases easily viewable from shore, and boat tours that showcase them up close also offered.

Among companies that enable people to approach icebergs by water is Ocean Quest, which can have clients do that by kayaks and Zodiacs, and also enables scuba divers to view ‘bergs from beneath the ocean’s surface. More information can be found at oceanquestadventures.com.

More information can be found at AdventureCentralNewfoundland.ca.