The Moorings offers a one-of-a-kind vacation 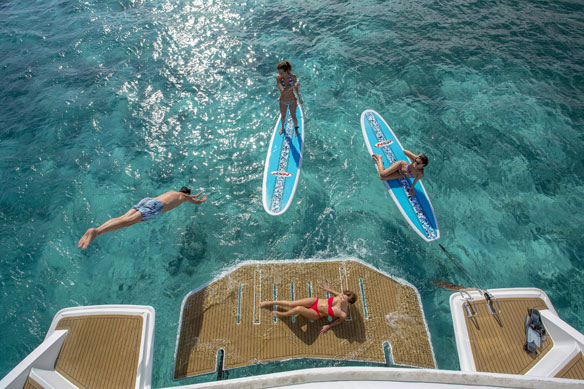 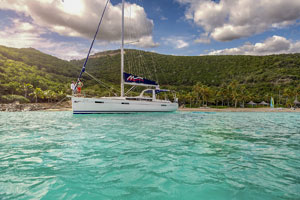 After touching down on Tortola, the largest of the British Virgin Islands, and taking a short stroll from the airport over to the marina, captain Martin Street pointed to the biggest yacht in the vicinity and announced it would be our home for the next few days.

Minutes later, we were onboard Prodigious – part of The Moorings sail catamaran fleet – settling on our throne, cocktails in hand, enjoying the sunset and taking in the first glimpses of a destination where vivid turquoise waters meet a lush green mountain terrain.

The next task at hand was to chart our course for the next few days, as the itinerary was up to us. We immediately devised a plan to take in some of the must-see attractions – there’s snorkelling and exploring the caves and granite boulders of The Baths on Virgin Gorda, and soaking up scenic views from the top of Norman Island by Pirates Bight where the windward side features a turquoise bay, while the leeward side overlooks the many ships in the area. Naturally, heading to The Soggy Dollar, the famed watering hole where a local drink called the Painkiller was invented, also ranked high on the list of priorities. 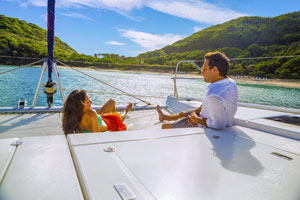 The next morning we awoke to breakfast overlooking a secluded stretch of white-sand beach on Guana Island. On the agenda: taking the dingy over to enjoy our own private beach, followed by lounging on yellow floats attached to the catamaran with drinks in tow, thanks to bartender Kay, and then another home-cooked meal courtesy of chef Katie. Ah yes, this is the life of luxury.

Describing it as the best of what an all-inclusive resort and a cruise offer, along with the flexibility to explore multiple destinations, Ian Pedersen, marketing manager for The Moorings, says this type of vacation is a great option for clients who are looking to try something new, while having a fully immersive experience.

“It’s for people willing to take that jump and try something different. It’s definitely a unique experience,” he says. “It’s a totally unique type of vacation that may change the way you think of any other vacation. They may want to explore the islands, but the only way they know is to either stay at a resort, book a super expensive villa or take a cruise. This is kind of the best of all three, all rolled into one.”

For agents interested in booking the product, here are 10 things to know to help you sell The Moorings:

They’ve been around the block
The Moorings started off in 1969 with six boats in Tortola. Today, post-Irma, the premier yacht charter company has a fleet of over 400 vessels, nearly 300 of which can be found in the British Virgin Islands.

“BVI is far and away our most popular destination,” he says. “It’s like God just built those islands to go sailing.”

The company was founded nearly half a century ago by Charlie and Ginny Cary, who relocated from New Orleans to start a small boat rental operation. In celebration of its 50th anniversary in 2019, The Moorings has launched new branding to mark the occasion.

It’s like an overwater bungalow
Today, The Moorings operates in over 20 destinations worldwide, such as Seychelles, Greece, and Thailand. Its newest additions include Sicily, the Exumas, and Antigua.

“Anywhere you want to go, we are sailing somewhere nearby,” he says.

Another popular location is Tahiti, where he feels the company has a unique offer.

“This is still an overwater bungalow, you can just take it with you to about eight different islands,” he says. 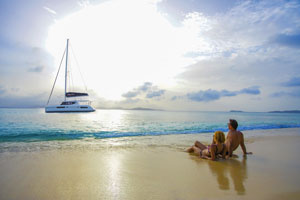 Clients don’t have to sail themselves
Although The Moorings was established as a bareboat sail-it-yourself company, the offer has expanded to sail, power, skippered and crewed vacation options. Describing it as “the creme de la creme” of its product offering, he says the all-inclusive packages come complete with a captain and chef (like ours).
“If you have a skipper, they’ll do the work for you, and you can focus on doing your job, which is drinking and swimming and enjoying your vacation,” he says. “You can just hire the skipper, you can just hire a cook if you want to captain the boat yourself.”

Agents are back
As for the trade, The Moorings offers a sliding commission scale starting at 5% and increasing depending on the frequency of bookings.

Although there was a period of time where the company was focusing solely on direct bookings, he says there was a change in leadership a few years ago and they’ve been rekindling relationships with the trade since.

“That takes time, but it is absolutely a growing portion of the industry that we’re trying to work with,” he says.

To showcase the commitment to the Canadian market, The Moorings hired Greg Marlo as its Canada business development manager.

It’s more affordable than one may think
Although the cost of a trip can be around $30,000, split between up to five couples, he says it’s comparable to a high-end all-inclusive getaway, but with every day being an excursion.

“This is the type of product the average traveller isn’t going to know about or they think they can’t afford it,” he says.

Added by popular demand, there’s even an option for travellers to book just one stateroom, and share the space with like-minded people. It’s been so successful in the BVI, he says they’re looking to expand the offer in other destinations.

“The main thing with a vacation like this is it’s not just one size fits all,” he says. “It’s probably the most flexible vacation option that I can imagine in that there’s a boat for every budget, there’s a different type of charter vacation for anything that you want.”

“It’s a vacation that’s what you make it,” he says. “If you like a place you can drop anchor and spend an extra night.”

The range of activities includes fishing, sailing, paddle boarding, as well as stopping to explore landmarks, beaches, islands and cities along the way. Since all the boats come with a dingy, he says travellers have the freedom of going to shore to experience the local nightlife.

It’s still undiscovered
As “the best-kept secret of the sailing community,” he says there’s lots of opportunities to grow business with The Moorings. Since they expanded to offer the powered catamaran product and the all-inclusive crewed yachts, he says it’s opened up a whole new segment of the market.

“With the yachts, that really opened it up to anyone who wants a different travel experience,” he says.

“We’re really using that as our flagship products to go to market with, especially with travel agent partners that are dealing with people who want to try something new and go for a fully immersive vacation experience.”

They’ve weathered the storm
Although several of The Moorings’ destinations were impacted by the wrath of Hurricane Irma, they bounced back quickly. The flagship base in Road Town, Tortola officially reopened just three months after the storm, followed by St. Martin. Today, over one year later, The Moorings BVI fleet is around 300, which is near pre-Irma capacity, he says.

Learn from my experience
I wasn’t quite sure what to expect when I signed up for four days at sea. Having never cruised or river cruised, what would life be like on board a much smaller vessel: The Moorings 5800 Legacy Edition sail catamaran? Would I have to share a bathroom? Would we be squished like sardines?

Upon setting foot on the spacious boat, any reservations I had were replaced by finding elaborate ways to extend our time on board to at least a week (alas, to no avail). Each room was equipped with its own shower and toilet, and there was ample room to hang out and even get some alone time, from the beanbag chairs at the front of the boat, which made for an ideal spot to lounge and get refreshed by the occasional spray of water as we sped along, to an upper lounge providing perfect views of the surrounding area. Add in the home-cooked meals, and Kay, who ensured we were never thirsty and also made sure my bed was always made, and we definitely were living the good life.

Food allergies? No problem.
The Moorings caters to a group’s drink and food preferences. From coffee to apple juice to the libation of choice, guests fill out forms prior to takeoff to ensure the boat is stocked with their favourites, and then some.

Katie, our chef, served up meals for a variety of dietary restrictions and food preferences, including vegan alternatives. We enjoyed three meals a day in addition to pre-dinner nightly sunset cocktails and canapés. Courses ranged from teriyaki salmon fillets with orzo salad to homemade coconut pancakes and chocolate chip muffins to lamb gyros. Take me back! This was a bucket-list experience I won’t forget.