Canada a favourite with Dan Hotels 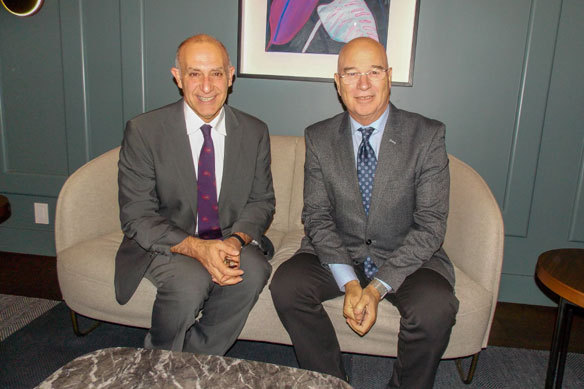 Top officials from Dan Hotels were in Canada recently to meet with the travel trade and to get a sense of where the market was headed from the people on the ground here.

Asked about the significance of the Canadian market for Dan Hotels, the hotel company’s director of international marketing, Rafi Baeri told Canadian Travel Press: “Well, first of all, I have to say the Canadian market is important for Israel because if we are talking about a market the size of Canada, population wise it’s just about 10% of the US [but] the number of tourists [it produces] is more like 15% of the US, so it means that it has a significant value for Israel.”

Baeri said that the Canadian market has “always been 12% to 15% of the US market,” noting that: “the North American market is the most important market for Dan [Hotels]. We have 40% of our overseas visitors [coming] from North America. The bulk is still [from] the United States, but Canada is very important, and in 2017, we had a tremendous growth of more than 20% from Canada.”

While Baeri said that the final numbers for 2018 aren’t in yet, he made it clear that that trend continued in the year just winding down and will continue on into 2019.

“From initial indications [for] 2019,” Baeri told CTP, “it looks like we are going to experience a record high of visitors from North America. On the books today, we already have about a 30% increase, which is mostly Groups because individuals tend to reserve much later, but when you talk about Groups, [we have] almost 30% growth now as for the same time last year.”

As for his recent stop in Canada, Baeri said he visits Dan Hotels’ most important source countries at least once every two years, so the timing was right to make a stop in Canada because the hotel company has “very good clients, very good operators and travel agents [here] and it’s an opportune time to come and meet them and visit, hear what they need, what the need of the Canadian traveller is.”

Dan Hotels’ New York-based national sales manager, Eitan Sasson added that the visit was also designed “to get a sense of where the [Canadian] market is headed [and] if indeed the indication that we see is backed by the people on the ground.”

Certainly Dan Hotels is a well-recognized name on Israel’s hotel scene, and it has spent decades building its business and reputation in both Canada and the US.

Founded in 1947, Baeri said that from the start Dan Hotels “saw the North American market to be the number one market and the product that we have to deliver is the American, Canadian, North American standard.”

He continued: “This is something that we’ve been developing throughout that time, and the investment over the years of constant visits, advertising, promotions and so on has been paying off. I think that the name of Dan [Hotels], although not being an international – a true international – chain, is quite well-known when it comes to these markets.”

Baeri also noted that since it was founded, Dan Hotels has grown its business at a slow, careful and calculated pace, and today has 13 hotels in its portfolio. Until this year, those properties were all in Israel, but in 2018, the company took a big step, opening its first international property in Bangalore, India.

And in the next few weeks, Baeri confided to CTP, Dan Hotels will take another big step, finalizing the acquisition of a smaller hotel chain in Israel — Rimonin Hotels & Resorts – which has 10 properties for a total of about 1,200 rooms.

He also told CTP that: “We firmly believe the difference between Dan [Hotels] and other chains in Israel and abroad, is the fact that we own all our properties,” and because of that, the company makes significant investments in both hard and soft renovations. In fact, in 2018, it invested C$50 million in its hotels.

As for his message to the Canadian travel trade, Baeri said: “The message is that Israel is continuing to be very popular. I think people feel that the Middle East, in general, is coming back. I hear that our neighbouring countries are also doing very well – especially Egypt and Jordan. I think that for those who have been to Israel before or who are thinking of the possibility of coming to Israel, now is a good time, and with the possibility to combine a few days with our neighbouring countries, it is even more attractive than ever. We have high occupancy, but we still have space, and we would like more Canadians to come and visit us.”

For more on Dan Hotels, go to https://www3.danhotels.com/.