As tourism to Ireland continues to boom, with the island nation reporting record-breaking results for the seventh straight year, the Canadian market is doing its part to contribute to the growth, joining the ranks as a top 10 feeder market for the destination.
“We’ve finalized figures, which show us breaking over the 200,000 [Canadian] visitors mark, which is really positive, and we believe we can grow on that again. As a small country, we’re really punching above our weight,” Ireland’s Minister of State for Tourism and Sport, Brendan Griffin, TD, told Canadian Travel Press during a recent visit to Toronto. “Tourism is a huge part of our economy – over 10% of all people working in Ireland are working in tourism – so, we know where our bread is buttered, and we want to ensure that’s sustained into the future.”
With increased connectivity from Canada, including 8,000 weekly seats to Ireland at peak summer season, one in five Canadians claiming Irish heritage and a 12% growth in Canadian arrivals in the books – representing an additional 27,000 visitors over 2016 – Griffin is confident the number of visitors from Canada will continue to soar.
“In a relatively short period of time, we’ve gone from 2% of the outbound market to
4.2% of Canadian outbound,” he said. “We have so many links it’s important to build on those, keep those strong. I think that tourism is one way certainly of doing that. It really brings people together.”

The ties that bind
In addition to joining Tourism Ireland and 13 tourism partners on a four-city sales blitz, Griffin’s visit to Canada was twofold. Also on the agenda was moving forward in a joint UNESCO World Heritage bid between Ireland and Canada to recognize the transatlantic cable between Valentia Island in Ireland and Heart’s Content in Newfoundland, which connected Europe and North America for the first time in terms of instant communication.
“This was a hugely significant communications development in 1866, basically before that if you wanted to send a message between Europe and North America, you had to send it by boat, this was allowing messaging to happen instantaneously,” he said. “Queen Victoria sent the first message actually from London to New York. This is something that’s recognized as the beginning of globalization in terms of instant communications.”
Some of the major news conveyed over the cable included the outbreak of the First World War and the sinking of the Titanic.
“I think it’s certainly of the calibre of UNESCO status, and it’s something both governments are determined to pursue together,” he said. “The cable, day one, drew people closer together on both sides of the Atlantic; and this project again is building new relations and interlinking people on both sides of the Altantic as well, which is kind of nice and symbolic. We have a really long and strong history between Canada and Ireland.” 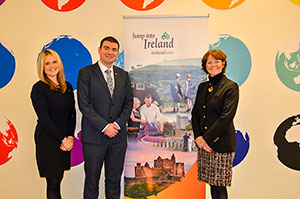 All about the experience
In terms of its tourism offer, Griffin said Ireland is dedicated to developing experiences across the destination regardless of seasonality.
“We’re developing loads of new experiences and investing in the Irish tourism product heavily through capital investment,” he said. “Rather than everyone coming into Dublin for three months of the year, what we’re looking to do is bring people to every pocket of Ireland right throughout the year.”
Some recent examples are the development of Ireland’s Ancient East, the Causeway Coastal Route and the Wild Atlantic Way, which spread the tourism offer across the destination and can be enjoyed as year-round experiences.
“The Wild Atlantic Way, which is a 2,500 km coastal avenue from the north to the south of Ireland along the western seaboard, is an avenue of experiences from Donegal right down to Cork,” he said. “A fantastically spectacularly scenic coastal route, with loads of authentic Irish life along the way. Great food, great pubs, great beaches, great activities, and something for everyone.”
Ireland is also capitalizing on being a filming location for Star Wars: The Force Awakens and The Last Jedi. Along with ad campaigns and marketing materials inviting fans to discover Star Wars in Ireland via Earth’s Wild Atlantic Way, outdoor movie screenings are set to take place on May the 4th. Visit ireland.com/starwars for more.

Taking off
One of the key factors contributing to the rapid growth from Canada is the strong connectivity via Aer Lingus, Air Canada, Transat, ASL and WestJet.
“As an island nation, of course, you depend heavily on air access,” he said. “We’re trying to have the best possible environment for that access to be sustainable, so what we did as a government, was we scrapped all airport taxes in and out of Ireland, to make it more attractive.”
While lift access continues to improve, including the addition of Shannon as a second gateway in Ireland from Canada – which many Canadian operators expressed the need for during a Tourism Ireland event with the Taoiseach last year, this time around the request was for more accommodations across the destination.
Meanwhile, Ian Duffy, president of Royal Irish Tours, said another challenge is getting Canadians to think of Ireland in the winter, when they’re primarily focused on heading south.
“Sun destinations can’t compete with the ancestry connection,” said Griffin. “We have so many links, it’s important to build on those, keep those strong.”
Looking ahead, Griffin said the uncertainty surrounding Brexit will continue to be a challenge.
“Since 2016, we have seen a considerable fall-off in numbers from the UK. Last year, there was a 5% reduction in overseas arrivals from Britain. That’s a big challenge for us… There’s huge uncertainty into the future,” he said. “Britain themselves don’t know how Brexit is going to look, so it’s very hard for us to know, but we need to try to be as robust as we can in terms of our efforts to offset any of the impacts.”

Trade talk
As for the the role of the trade, Griffin said travel agents provide clients with expertise and knowledge in a world that’s full of information overload.
“Typically, Canadians when they come to Ireland they stay for 10 nights and they spend a lot. They’re high-end visitors and they invest a lot in their holiday and they want to know what they’re getting is top-notch,” he said. “People want to have quality experiences, they want to have special experiences and I think that’s where the agents come in, and give people those guarantees and give people their expertise. In a world with so much information coming at you, it’s very hard to get that precise information on your own.”
As for why agents should sell Ireland and why operators should package it, he pointed to: “it’s easy to get to, it’s affordable, you’re getting a quality product, it’s highly reputable, and internationally, it’s recognized with award after award for being a premium tourism destination.”

Where are you from? I’m living on the Wild Atlantic Way. I’m from Kerry.

What’s your favourite spot in Ireland to visit? For me, the Dingle Peninsula.

What about your favourite Irish dish or drink? You can’t beat a good pint of Guinness. So clichéd, but it is so good. And a grass-fed fillet steak from an Irish farm is just outstanding.

Share a favourite travel memory in Ireland: I would say visiting the Aran islands with my wife, back when we were students, 15 years ago. There’s a great fort, called Dún Aonghasa, an ancient stone fort and it’s right up to the cliffs, so if you crawl up there and look over, it’s fairly exhilarating. It’s 300 feet above the sea, and you’re looking down over the sea, it’s amazing.

What’s something you like to do in your neck of the woods? I love standing on the beach of Inch in January when the waves are thundering in, and just feeling alive, and feeling the water in your face. It’s brilliant. I prefer it personally to the months of June or July. Many people like to walk along the water when the sun is setting.

What do you think surprises people most upon visiting Ireland? The food is a surprise for a lot of people. I think sometimes people think that maybe food in Ireland isn’t world-class. Bear in mind, we’re an island nation with a huge tradition of fishing, so we have fresh fish all around the country. On plates sometimes the same day as it’s caught. People are pleasantly surprised when they walk into a restaurant, and they see that the steak they’re getting that night is from the farm of John Murphy, grass-fed steak from a mile out of the village. Organic, home-produced food is very evident on menus now all over Ireland, not just the top restaurants, but right through the country.

Anything else? I think that as well, just the scenery. People see it online, but it’s only when they’re standing on the Giant’s Causeway – it’s not quite the same until you’re actually there in person. People 9/10 times will tell me they’re blown away. 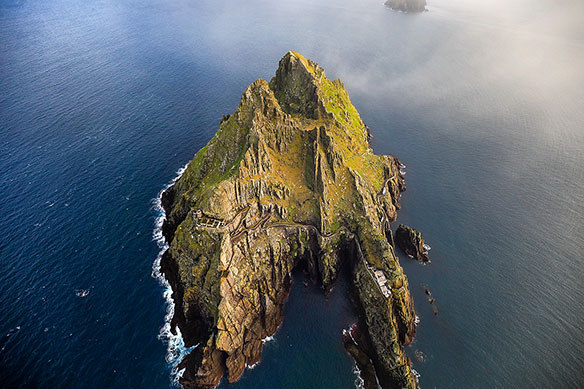