Feeling the vibe in Jamaica

It’s more than an island in the sun 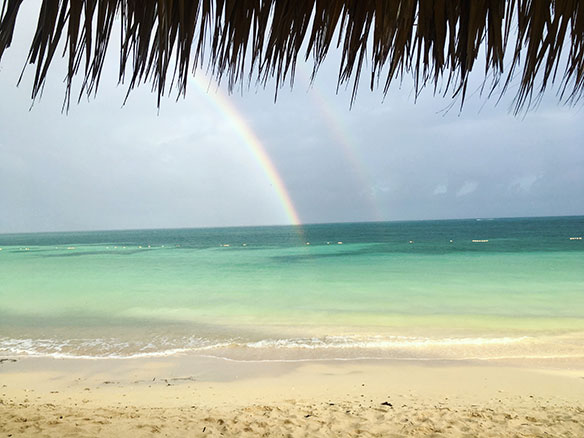 If the essence of a destination could be captured by an artist, it just may be Jamaica and the reggae, ska and rocksteady sounds of singer-songwriter Bob Marley. Laid-back lyrics like “Don’t worry about a thing, cause every little thing’s gonna be all right,” make for an ideal soundtrack, as vacationers bask in the sun from one of the Caribbean island’s many white-sand beaches, perhaps with a rum punch or Red Stripe in hand, thoughts of work a distant memory.
While travellers are often lured in by the warmth of the sun, sand and sea, there are plenty of things to experience in Jamaica beyond simply the beach.
Earlier this month, Travel Courier went down to Montego Bay to uncover some of the many activities and excursions that await clients in the destination.
Here are but a few… 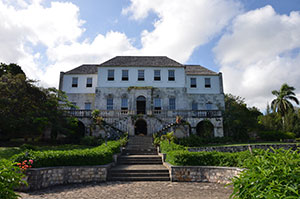 Learn the tale of Annie Palmer
Those who know Johnny Cash’s song The Ballad Of Annie Palmer may already be familiar with the so-called White Witch of Rose Hall, who is said to have murdered not one, nor two, but all three of her husbands.
Tours of the Rose Hall Great House, a former plantation, focus on the tale of Mrs. Palmer, whom some believe still haunts the grounds to this very day. For an even creepier twist, clients can try the Rose Hall Great Hall Haunted Night Tour, when the house glows an eerie shade of red and “ghosts” come to life.
Roughly US$2.5 million was spent on restoring The Rose Hall Great House after the late American entrepreneur John Rollins purchased the property in the 1960s. 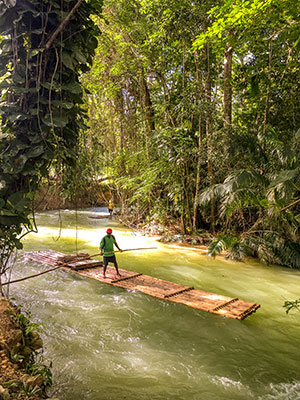 Rafting on the Martha Brae

Head down by the river
What do Her Majesty The Queen, Chuck Norris, Spike Lee, Jane Seymour, Kenny Rodgers, and Usain Bolt have in common? They’ve all embarked on a rafting journey down Martha Brae River. Aboard thirty-foot long bamboo rafts, this popular attraction allows visitors to unwind, as they are guided along a three-mile stretch to take in scenery and wildlife, passing almond trees, coconut trees and breadfruit trees along the way. Its close proximity to Falmouth makes rafting on the Martha Brae an option for cruise ship passengers, as well.

Visit the Doctor
While most resorts in MoBay come with a beachfront location, none are arguably as popular as Doctor’s Cave Beach, which was thought to have the power to cure ailments. The beach gets its name from Dr. Alexander James McCatty, who donated the property in 1906 to found a bathing club. At this time, the beach was accessed through a cave, which was later destroyed in a hurricane. Doctor’s Cave has been a tourism draw since the 1920s, when a famous British Osteopath published an article on the curative powers of its waters. Today, the beach club features colourful umbrellas, lounge chairs, food and drinks, change rooms, showers, and more. There is a $6 charge for entry.

Get a feel for the city
To get a sense of the history of Montego Bay, visit Sam Sharpe Square, which commemorates one of Jamaica’s national heroes. Sharpe was a Baptist minister who encouraged non-
violent protests as a means to emancipation.
Another idea is to visit The Montego Bay Craft Market on Harbour Street, which boasts a large collection of handmade souvenirs and locally made goods across 254 stands.
Finally, called the Hip Strip more commonly than its actual name, Gloucester Avenue is lined with shops and bars, and is a popular stop for those who visit the city. It’s also home to the first store-front Starbucks in Jamaica.

Have a thrill
For an outdoor adventure, clients can embark on a day trip with Chukka Caribbean Adventure, which offers excursions from Montego Bay, Falmouth, Negril and Ocho Rios. Set on 2,000 acres, its Montpelier Jungle Outpost features kayaking, river tubing and zip-lining options. Should your clients find themselves with a guide who calls himself Shrek, they’ll be entertained the entire time. During the river tube ride on Great River, the island’s fourth longest river, participants have the option of swinging off a vine into the water. 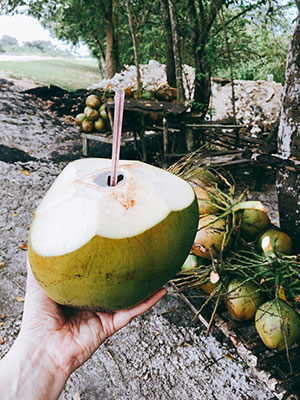 Fresh coconut water is a must in Jamaica!

Indulge in local delights
Jamaica is jammed with local delights to try, but one place to eat that’s gained international recognition is Scotchies Jerk Center. Native to Jamaica, jerk is a style of dry-rubbing or marinating meat with a hot spice mixture called Jamaican jerk spice. Here, options include jerk chicken or pork, fish, and sides like bammy, festival, breadfruit and yams. During our visit, executives from Sesame Street in town from NYC, even stopped by for a bite.
It doesn’t get any better – or fresher – than stopping for fresh fruit from vendors on the side of the road. We pulled off for some delicious coconut water. It’s a highly recommended stop.
Patty connoisseurs can go on a mission to taste test the difference between two of the most established local patty sellers: Tastee and Juici. Locals have very strong opinions on which they prefer.
Another spot to try is Pier 1, which overlooks the water and the city. This is also a great spot to watch the sunset, or have a night out.

Note: Travel Courier was in Jamaica while the public state of emergency in St. James Parish, which includes MoBay, was ongoing. We found that all excursions and public spaces were still filled with tourists, and everything appeared to be business as usual aside from security checkpoints on the outskirts of the parish. For more on the situation and tips on how to sell the destination in light of the increased security measures, check out the Feb. 26 edition of Canadian Travel Press at bit.ly/2CKKZt9. 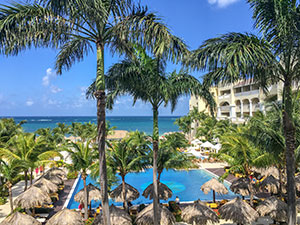 Sold by: Air Canada Vacations, WestJet, Transat, Sunwing and TravelBrands.
Critical acclaim: one of the resort’s recent accolades includes winning Apple Vacations’ Crystal Apple Award for Best All-Inclusive Resort in 2017.
Cool feature: balconies come equipped with a hanging lounge chair, perfect for enjoying morning coffees, hanging out or even napping outdoors.
Be sure to: enjoy a soak in the in-room hydro-massage tubs.
Instagrammable moment: whether it’s the beachfront restaurants and tiki huts, there are no shortage of options to choose from, but one of the most impressive views is from the main balcony overlooking the pool, beach area and beyond. 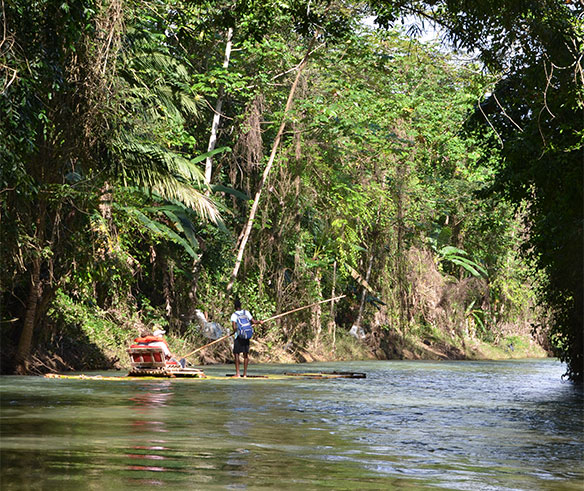