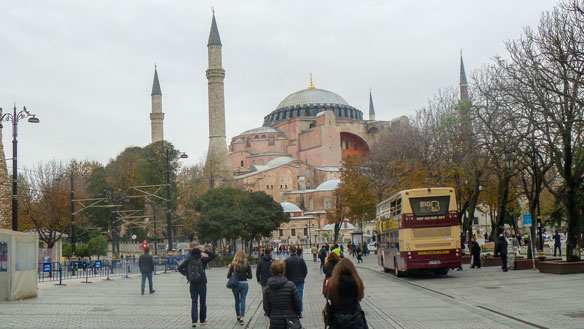 Turkish Airlines is eager to serve as a modern-day Orient express for those wanting to travel from this country to Istanbul.

The carrier now has six weekly non-stop flights from Toronto to a city that straddles the dividing line between Europe and the Orient, and three a week from Montreal, and Mustafa Dogan, the airline’s VP of sales for the Americas, Britain and Ireland, says a greater Turkish Airlines presence in Canadian skies may be in the works.

Dogan says expanded service out of both Montreal and Toronto are possible and the airline is eyeing the West, as well.

“We can say Vancouver is in our plans,” he says.

Thumbs-up
Management at Turkish Airlines, which began operation in 1933 and today serves over 130 countries, note that it has received the thumbs-up on numerous occasions from authoritative Skytrax, which named it Europe’s top airline for six straight years and has also labelled its Istanbul lounge the best business class lounge in the world in 2015 and 2017, and the world’s best business class lounge dining for three straight years.

But that existing lounge will pale beside the one that will be part of the new Istanbul Airport, which is opening in phases and which Turkish Airlines and others with a stake in Turkey’s tourist trade say will make flying to and departing from Istanbul much more attractive.

Turkish Airlines’ lounge at the new airport will cover some 22,000 square metres, compared to the 5,000 square metres at the lounge at Istanbul Ataturk Airport. The existing lounge has such unusual features as a theatre that serves popcorn, hotel-style rooms for those wanting to rest for several hours before their connections, showers, billiards, massage beds, and a golf simulator.

Dogan is upbeat about the new airport, which will ultimately occupy 76.5 kms, have six runways, four terminals, over 500 check-in counters, 233 aircraft parking positions, and which is eventually expected to see 200 million users annually.

All Turkish Airlines operations will have relocated from Istanbul Ataturk Airport to Istanbul Airport by Dec. 31.

He labels Istanbul the “world’s perfect transit point with its geographical advantages.”

Many of those travelling on Turkish Airlines’ Canadian routes are travelling with the carrier beyond Istanbul, with Dogan noting it offers 55 destinations in Africa alone.

Turkish Airlines reports that 60 capital cities can be reached within a three-hour flight from Istanbul.

Meanwhile, international firm DO & CO, which provides food catering for Turkish Airlines, notes that there are over 500 “Flying Chefs” who prepare meals for Turkish Airlines Business Class passengers. The trained chefs can at times lend a hand elsewhere.

Among those with kind words for Turkish Airlines is Sally Mikhail of GM Tours, who praises it as a “great airline” for those travelling directly to Istanbul or wanting a stopover in Istanbul before connecting to other cities in the Middle East, Africa or Europe.

“It has great service with good selections of food,” Mikhail continues of the airline.
More information is available at turkishairlines.com.