Welcome to the EDGE 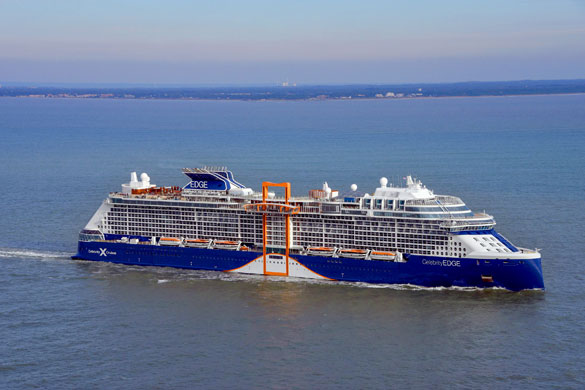 The first thing you’ll notice when seeing Celebrity Cruises’ iconic new flagship, the Edge, is the tangerine-coloured – not orange – Magic Carpet, an industry-first 90-ton platform that is cantilevered over the side of the ship. 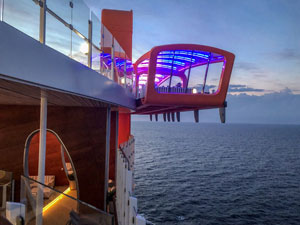 The groundbreaking 2,918-passenger Edge welcomed its first passengers last week as Celebrity offered travel trade personnel from around the world, including CTP’s Greg Coates, a first look at the new ship during a two-night sailing out of Fort Lauderdale.

The ship was clearly a hit as adjectives like “stylish” and “sophisticated” flew around the dinner tables. One cruise aficionado claimed, “my ship has come in.”

It could be said that Edge is understated, but still has a significant “wow factor.” As Celebrity president Lisa Lutoff-Perlo noted, “we wanted to make people feel comfortable, yet inspired.”

With Edge, Lutoff-Perlo said, “we wanted to transform not only the brand, but also the industry.” 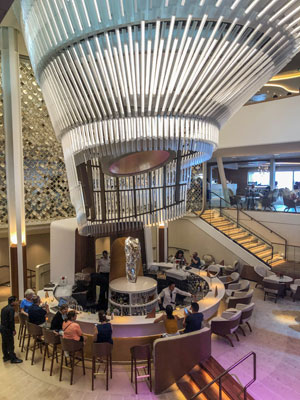 She added that when designing the Edge, Celebrity did not veer away from its five main pillars (design, destination, culinary, accommodation and service), but simply took them to the next level.

“It’s all about enhancing the customer experience,” she said.

Back to the unique Magic Carpet, which can be moved up and down to serve different functions. At the summit of the ship on Deck 16, the Magic Carpet offers a special “Dinner on the Edge” experience. Alongside Deck 14, Magic Carpet becomes an open-air expansion of the main pool area. On Deck 5, it extends one of the ship’s specialty restaurants, Raw on 5, and at its lowest position on Deck 2 is a key component to the Destination Gateway, a luxury embarkation station.

Spanning three decks at the heart of the ship is The Grand Plaza, inspired by the piazzas of Italy, and home to several specialty restaurants and the popular Martini Bar, which features The Chandelier, a striking lighting feature and art installation.

Other unique features include the Rooftop Garden, a “living urban playscape,” the Resort Deck, home to the main pool and the adults-only Solarium pool, and Eden, a venue where state-of-the-art design is fused into every element, including cuisine served by “Edenists.” Spanning three decks at the aft of the ship with almost 7,000 sq. ft. of glass, Eden has more outward-facing glass than any other room at sea. The venue transforms throughout the day, from “chillful mornings to playful afternoons to sinful evenings.” 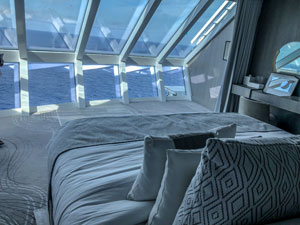 The Spa on Celebrity Edge offers more than 22,000 sq. ft. of space and was inspired by nature and designed by world-renowned designer Kelly Hoppen.

The Theatre on Celebrity Edge throws away the curtain, blurring the line between audience and performance and immersing guests into a unique entertainment experience, a kind of theatre-in-the-round.

Accommodation options include the revolutionary new staterooms with Infinite Verandas, described as turning a guest’s quarters into a seamless space, from the room’s door all the way to the water’s edge. The simple touch of a button gives guests open-air access, while bifold doors can be shut to separate the veranda from the rest of the room. These staterooms are 27% larger than the rest of the fleet and bathrooms 10% larger. 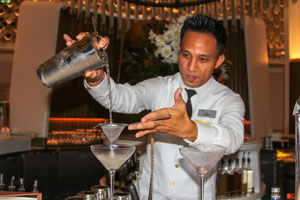 With Edge, Celebrity has more than doubled the number of available suites, adding two new categories. At the top of the line are two new Iconic Suites situated above the ship’s bridge. These near 2,600 sq. ft., two-bedroom, two-bathroom suites feature amazing views thanks to panoramic windows enveloping the dining room, living room and bedrooms. The 700 sq. ft. veranda offers a 270-degree view of the ocean.

On the culinary front, Edge has 29 restaurants, cafés, bars and lounges, including four main dining restaurants and seven specialty restaurants.

Celebrity Edge will be joined by sister ship Celebrity Apex in 2020.